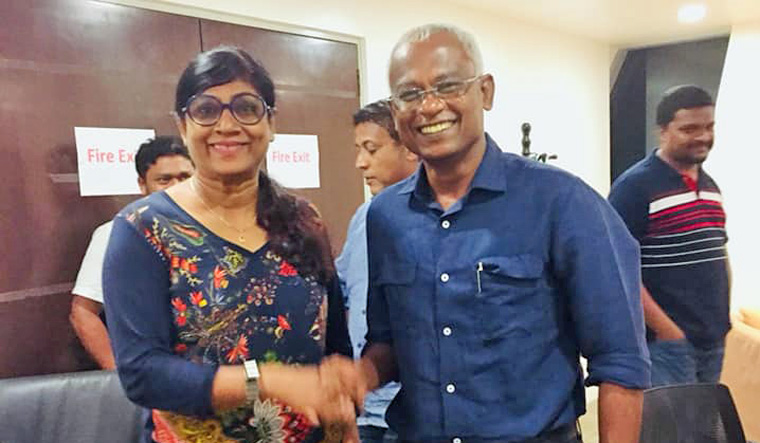 Mariya Ahmed Didi with the President-elect of Maldives, Ibrahim Mohamed Solih | via Facebook

The Elections Commission of Maldives on Saturday officially declared opposition leader Ibrahim Mohamed Solih winner of the country’s national election. Solih defeated president Abdulla Yameen who had sought a delay in publication of the final results.

Yameen conceded defeat on September 24, but his party later requested a delay in announcing the official result which, some in the opposition believed, may have been an attempt to have the election resulted annulled. However, even after the official announcement of results, Yameen will continue as the president until November 17, according to the Constitution.

With concerns still looming over a smooth transition of power, Mariya Ahmed Didi, spokesperson for the President-elect of Maldives, speaks to THE WEEK about the election victory and challenges ahead for the Solih government once sworn into office.

Excerpts from the interview:—

Congratulations on your election victory. Are you expecting a smooth transition of power?

The Elections Commission’s announcement of the final results on Saturday means that it is now much harder to challenge the outcome of the election. Moreover, the Maldivian army and police have vowed to support the will of the people. The entire international community has welcomed the election result. Nevertheless, we must remain vigilant, especially until the swearing in of the new president and vice president.

The election result, for most external observers, was unexpected. How did you manage such a huge turnaround?

The people of the Maldives have been long tired of the corruption and brutality of the regime. Maldivians are very independent minded people and they will not tolerate being pushed around by their government, or by anybody else. The election was a huge vote for change. The turn out was 89 per cent, even though many people had to wait for hours under the sun to cast their ballot. And the margin of victory for the opposition was the biggest in any presidential election since the Maldives became a democracy ten years ago.

India has welcomed your election results. And, you have invited Prime Minister Modi for the swearing in ceremony. How do you propose to repair or rebuild the ties with India?

We have been very worried about the deterioration in relations between the Maldives and India over the past few years, and it is something that we need to address.

While the relations between the two governments suffered, it is worth pointing out that the people of both countries have always remained close. Maldivians and Indians share many things. For example, both love Hindi films (many Maldivians learn Hindi watching Indian movies and soap operas). Maldivians often travel to India for medical treatment and for holidays, while many Indians work in the Maldives, and our country is a favourite vacation spot for Bollywood stars. Maldivians enjoy Indian food, and place a similar emphasis on family-orientated values. And many Maldivians remember having an Indian teacher at school.

Throughout our history, we have always maintained a close relationship with India. Given our shared history and cultural bonds, I hope the new administration can quickly work to repair the trust deficit that has damaged relations over the past few years.

Does the President-elect have plans to visit India soon?

During their recent telephone call, Prime Minister Modi invited President-elect Ibrahim Mohamed Solih to visit India after he is sworn into office, and the President-elect accepted.

Ties with China are also a crucial factor in the development of Maldives. What are your views on China-Maldives relations?

In the election campaign, the President-elect made it clear that we want to maintain friendly relations with all our international partners.

There were some reports that the new government would review Chinese projects and investments. What are your views?

We need to look at all the loans and investments President Yameen signed. There was very little transparency and many of the deals were made in secret. We don’t know how much the projects cost; we don’t know what the terms are; we don’t know the extent of the potential corruption. So we need to look closely at the details first before we come to any decision.

Do you think democracy suffered a setback under the Yameen regime. How are you going to address it?

Democracy suffered a huge setback. All the leaders of opposition were jailed, the media was constantly harassed, government critics were murdered, and our institutions were threatened and politicised. Things became so bad that prior to the election, the European Union and the United States threatened to impose targeted sanctions on regime leaders.

The President-elect has stated the importance of repairing our democracy. This means that we are accountable, that we obey our Constitution, respect human rights and the rule of law, free all the political prisoners, and work to ensure our institutions are competent, independent, and enjoy the respect and confidence of the Maldivian people.

Tell us about the challenges of climate change and your plans to tackle the issue.

In our manifesto, we spoke about the importance of protecting the environment. And that is something the government will focus on. In particular, we must protect our coral reefs, because they are the foundation on which our country rests. We need to vastly improve our waste disposal, and speed up the transition from an economy based on fossil fuels to one run on renewable energy. We are blessed with abundant, year-round sunshine and solar power is the cheapest form of energy in the Maldives. So we will make a big push in that direction, and ensure that we play our part to reduce carbon pollution.