India, ranked sixth in the world, produced a below-par performance 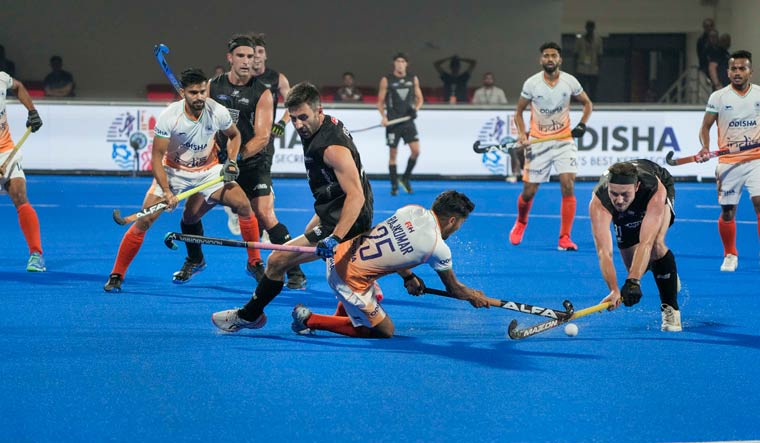 Indian and New Zealand players vie for the ball | PTI

The match was going as per expectations. Till the fourth quarter, India was leading against New Zealand in its crucial crossover match 3-2 but a poor fourth quarter not only saw the Kiwis levelling at 3-3 but, also saw penalty corners by a desperate India going waste. The drawn scores meant a penalty shootout which too ended in a stalemate at 3-3, courtesy goalkeeper S. Sreejesh’s last two saves.

Finally, the sudden death saw New Zealand prevailing 5-4, Skipper Harmanpreet missed the first scoring opportunity as did Sukhjeet Singh and Shamsher Singh. The Kiwis held their nerves to march into the quarterfinals of the ongoing FIH World Cup. The Indians will play classification matches next in Rourkela for the 9th to 12th position.

Coach Graham Reid was at loss of words and visibly disappointed with the team’s performance, especially having given up the lead not once but twice due to errors by his players. Asked how and where the team erred after the Olympic podium finish, Reid didn't have much to say. “Obviously, our PC conversion, but we also had a lot of circle penetrations, but, we couldn't convert those. I think we scored 3 goals today, 3-4 goals would normally be enough. In defence, we probably needed to be in front a bit more and a bit tighter,” he said.

On whether PC conversions or the lack of it- India got 11 PCs in total during regulation game time but could manage to convert only two. Asked whether that cost the host the match, Reid said, “Yeah it is a factor, but not the only factor. We still created enough chances tonight to win. The problem tonight was every time we won the ball we gave it back to them and you know that was a telling factor. They got 2nd or 3rd goal, we gave the ball back to them just after we won it, gave them oppourtunity. At this level, you can't do that.”

Meanwhile, skipper Harmanpreet Singh denied that the one-week camp with Dutch PC specialist Bram Lohmans had affected his and the team’s PC scoring abilities. “No we didn't change much, no problem on that end. We tried to score but it didn't work,” said the morose skipper who has had a poor tournament in terms of his goal-scoring abilities.

India has been fumbling in crunch situation right through this World Cup. When asked whether his wards faltered in pressure situations, Reid denied that as the main cause. “I am sure pressure and expectations all come into the mix. We made mistakes which we don't normally do, we need to analyse and talk about and come up with a solution before our next game.” He did mention that the team was without mental trainer at this competition and that would be a point of discussion with Hockey India post the WC.

When asked the reason for Team India's poor performance on Sunday night, Reid said, “ Tonight is about consistency. We let ourselves down in last quarter, threw the ball away; stuff like that makes it difficult. Every team will have issues with converting circle penetrations, we probably have to go back to the drawing board. It's very hard at end of the game to answer a question like that...its still execution at end of day. It's skill execution we need to get better at.”

When asked about the way forward for Team India to come out of this rut, Reid said, “The next two games are my main focus. In February-March, we come back to Rourkela and play against Germany and Australia in the Pro league matches. I think then there is Australia test series as well in India...details are being worked out yet. But for me, the focus is on our next game which is against Japan. “

Meanwhile, skipper Harmanpreet denied that the captaincy pressure had affected his form. “To be honest it's been some time since I became skipper. I don't think it's about pressure. I know all are talking about it (me not scoring enough) But I am trying – when you go out on the field you don't think, you won't score, there is pressure. You go in thinking you will score. No pressure, but will try to find what went wrong.”

Singh gave credit to the NZ goalkeeper Leon Hayward for stopping his direct shot in sudden death which perhaps cost India the match. “Mindset was to score a goal but I think the GK saved very well. We should have finished it within the match. You learn from your mistakes.”

Coach Reid refused to comment on the team selection for the world cup.