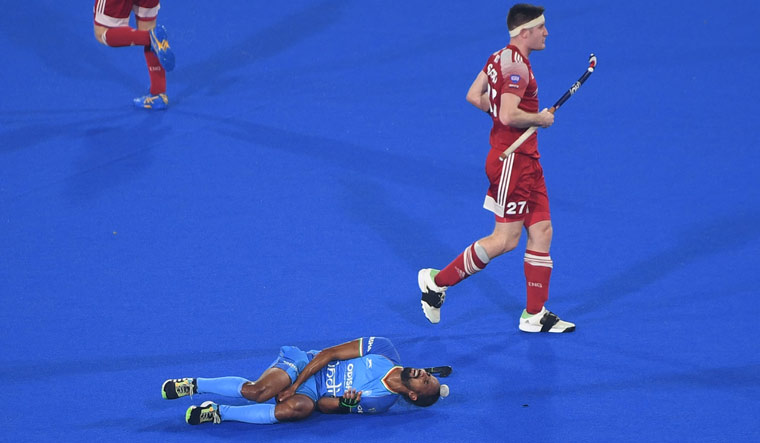 Injured midfielder Hardik Singh was ruled of the remainder of the FIH Men's Hockey World Cup, dealing a big blow to India ahead of their crossovers match against New Zealand on Sunday.

The 24-year-old Hardik failed to recover from a hamstring injury sustained at the fag end of India's second pool match against England on January 15.

His absence will be a big setback for India as they have been struggling in the attacking department, and also considering the fact that they will face defending champions Belgium in the quarterfinals if they beat New Zealand on Sunday.

Hardik, who scored a brilliant solo goal in India's 2-0 win over Spain in the opening match, will be replaced by alternate player Raj Kumar Pal.

Hardik did not play against Wales.

"Having rested the youngster for the match against Wales, and subsequent assessment, Hardik has now been ruled out of the FIH Odisha Hockey Men's World Cup 2023 Bhubaneswar-Rourkela," Hockey India said in a statement.

Talking about the decision made by the team management, chief coach Graham Reid said: "Overnight we had to make the difficult decision of replacing Hardik Singh in the Indian team for Sunday's match vs New Zealand and the subsequent World Cup matches.

"While the injury was not as severe as the initial incident suggested, time was not on our side and after our ongoing thorough rehabilitation process and functional and on-field assessment today, it has been decided that we will replace Hardik with Raj Kumar Pal.

"While it is extremely disappointing for Hardik personally of course, given how well he played in our first two matches, we are excited at the prospects of Raj Kumar joining the group for the remaining World Cup matches," Reid added.

Having finished second in Pool D, India will need to win against New Zealand in the crossover match to book a quarterfinal berth.

India needed to beat Wales - eight places below them in world rankings - by a margin of eight goals to top Pool D and qualify directly for the quarterfinals but the home side could only notch up a 4-2 win on Thursday.

India are now up against the Black Sticks who are placed third in Pool C with a win and two losses.