The 21-year-old forward scored a hat-trick against Switzerland, on Tuesday 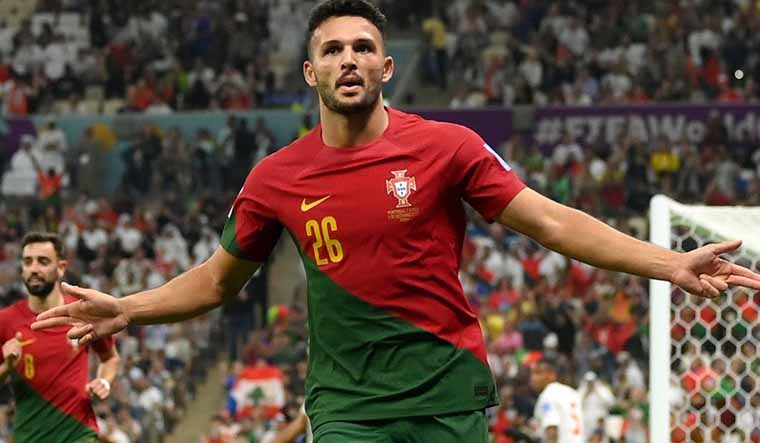 In his first start for Portugal's national team, Gonçalo Ramos showed that he has the goods and the goals to stand in for Cristiano Ronaldo.

Even at the World Cup.

The 21-year-old forward scored a hat-trick on Tuesday after surprisingly being called on to start against Switzerland in place of Ronaldo, the men's record holder for most international goals. Portugal won the match 6-1 and advanced to the quarterfinals for the third time.

“Not even in my wildest dreams did I think about being part of the starting team for the knockout stage,” Ramos said through a translator after being named player of the match.

Those three goals, and the smoking pistols goal celebration, instantly made Ramos one of the sport's hottest prospects.

Morocco, who will next play Portugal on Saturday for a spot in the semifinals, may not have known anything about Ramos before Tuesday. That has certainly changed.

Ramos had never played for Portugal before being selected in the World Cup squad last month. He was given the No. 26 shirt in the 26-man squad and played for only a few minutes as a late substitute in Portugal's group wins over Ghana and Uruguay. He had zero attempts on goal in those games.

“Most people in the world had never heard about him until today,” Portugal midfielder Bruno Fernandes said.

The first hint that Ronaldo's place might be at risk came on Monday. Portugal coach Fernando Santos vented his frustration with his long-time star's body language after being replaced in a 2-1 loss to South Korea on Friday.

Sure enough, 80 minutes before the start of the match at Lusail Stadium, Ronaldo's name was missing from the starting lineup. Ramos was his replacement.

The final result made Santos look more like a mad genius than a madman.

Ramos scored early, giving his team the lead in the 17th minute. Passes then started flowing, attacks came in waves and consumed the Swiss opposition, leaving them seemingly unable to track the speed and mobility of playmakers like Fernandes, Joao Felix and Bernardo Silva.

Ramos was at the centre of it all.

“Gonçalo is more dynamic,” Santos said through a translator. “Cristiano currently is a player who is more fixed and plays in a more determined area.”

Ramos linked easily with a group of teammates he has barely played with, ghosting in at the near post to poke the ball in from close range for his second goal, and the team's third, soon after halftime.

He created the fourth goal with a pass to Raphael Guerreiro and then completed his hat-trick with a deft flick over onrushing Switzerland goalkeeper Yann Sommer in the 67th minute.

Seven minutes later, Ronaldo came off the bench and replaced Ramos on the field.

They next met in the centre circle after the final whistle, the established star hugging his potential successor. Ramos was holding the match ball, the usual gift for a player who scores three goals.

The first hat-trick at this year's World Cup was only the fifth in the past three tournaments. One of those came from Ronaldo four years ago, when he was 33, in a 3-3 group-stage draw with Spain.

When Ramos returns to play for Benfica in the Portuguese league, he will no longer be under anybody's radar.

Yet clues were there when the young forward stepped up a level this season to replace Darwin Nez, now at Liverpool after another big-money sale by the Lisbon club. Led by goals from Ramos, Benfica is unbeaten both in Portugal and in the Champions League.

“It's because people are not aware of the quality in the Portuguese league,” Fernandes said. “I think people should be aware of Gonçalo and his qualities.”