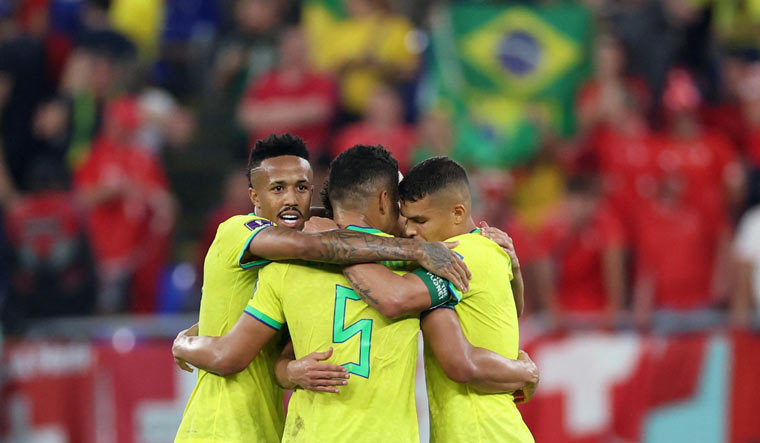 The knockout stages are beginning at the FIFA World Cup in Qatar 2022, starting with the round of 16 matches tonight. The Netherlands take on the USA, followed by the match between Argentina and Australia.

Here's a look at the possible route to the final for some of the big teams:

Brazil are looking to win a record-extending sixth World Cup. Brazil beat Serbia 2-0 and defeated Switzerland 1-0 in their first two Group G matches to secure a place in the knockout stages. Brazil edged out Switzerland to claim top spot in Group G by virtue of goal difference, despite being beaten by Cameroon in their final group game.

Brazil's Round of 16 tie will pit them against South Korea, the runners-up in Group H.

If Brazil make it to the semifinals, they could potentially face South American rivals Argentina (Group C winners) or the Netherlands (Group A winners).

If Brazil go all the way to the final, they could potentially find themselves taking on 2018 champions France (Group D winners) or 2016 Euro winners Portugal (Group H winners).

Argentina are bidding to win a third World Cup title, having recovered from their shock defeat to Saudi Arabia in their group stage opener, with back-to-back wins over Mexico and Poland to finish as winners of Group C.

Their Round of 16 match will be against Australia, the runners-up of Group D.

If Argentina beat Australia, they could face the Netherlands in the quarterfinals, provided the Group A winners are able to beat the runners-up from Group B - the United States.

If Argentina were to make it to the semifinal, they could face Group F runners-up Croatia or South American rivals Brazil (Group G winners).

If Argentina go all the way to the final, they could potentially find themselves taking on either 2018 champions France (Group D winners), England (Group B winners) or Portugal (Group H winners).

England are looking to win their second World Cup title, having finished top of Group B on seven points having beaten Iran 6-2 and drawn 0-0 with the United States, before defeating Wales 3-0.

England's Round of 16 tie will be against Senegal, the runners-up of Group A.

If England beat Senegal they could encounter France in the quarterfinals, provided the 2018 champions can beat Poland in their Round of 16 tie.

If England make it to the semis, they could face Group E runners-up Spain or Group H winners Portugal.

If England go all the way to the final they could potentially find themselves taking on five-times winners Brazil, who topped Group G.

Spain are looking to win their second World Cup title. Spain finished as runners-up in Group E on four points, edging out Germany on goal difference.

Spain's Round of 16 tie will pit them against Morocco, the winners of Group F.

If Spain beat Morocco they could face Portugal in the quarters, provided the Group H winners are able to beat Switzerland, the runners-up from Group G, in the Round of 16.

If Spain were to make it to the semifinals, they could be up against either Group B winners England or 2018 champions France, who topped Group D.

If Spain are able to make it to the final, they could find themselves facing off against five-times winners Brazil, who topped Group G.