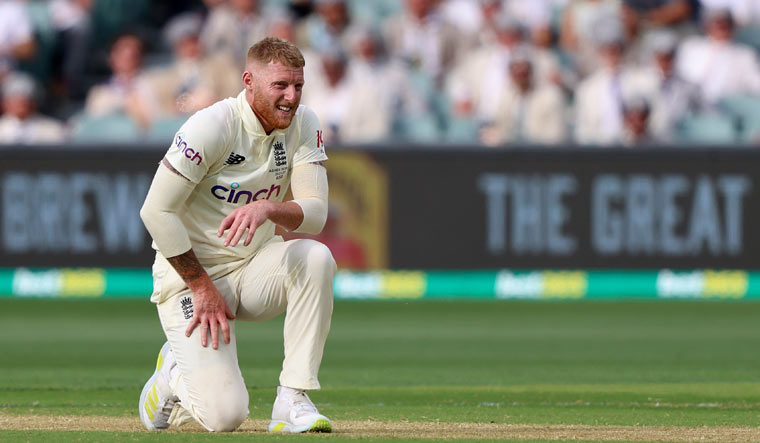 Ben Stokes during the second Ashes Test in Adelaide | AP

England cricket team's first Test match in Pakistan in 17 years has ran into trouble, with several players falling ill on the eve of the match.

Though team spokesman Danny Reuben did not elaborate on the nature of the illnesses or give the exact number of affected England players, reports suggest it is a virus attack and several England players, including captain Ben Stokes, are feeling unwell.

Only five England players - Harry Brook, Zak Crawley, Keaton Jennings, Ollie Pope and Joe Root – attended the training session at the Pindi Cricket Stadium on Wednesday. The rest of the squad members stayed back in the team hotel.

In the absence of Stokes, the Pakistan Cricket Board had to postpone the trophy unveiling of the series by a day and the ceremony will now be held on Thursday ahead of the toss for the first Test.

Former captain Root was one of five players who did attend, and he later spoke at the pre-match news conference. "As far as I'm aware, a few guys are not feeling 100 per cent," Root said. "I didn't feel great yesterday and I woke up a lot better today. So hopefully it's a 24-hour virus. Don't think it's like food poisoning or Covid or anything like that. We are trying to do absolutely everything right to make sure we are prepared for this game."

England have, reportedly, hired a chef for the tour after receiving feedback from players who visited Pakistan in September-October for a seven-match T20 series.

Pakistan captain Babar Azam wished the English players a speedy recovery. "I hope they get better soon. We would like to face a full-strength England tomorrow."

The Pakistan Cricket Board confirmed match will start as scheduled at 1000 local time (0500 GMT) on Thursday.

England have already named its playing XI for the opening game of the three-match series, with all-rounder Liam Livingstone set to make his Test debut while Ben Duckett was named as opener with Zak Crawley.

England last toured Pakistan in 2005 and is scheduled to play three Test matches at Rawalpindi, Multan and Karachi.