Qatar 2022: Can Ghana or Serbia do a Japan or Saudi Arabia?

Ghana play Portugal, while Serbia will take on the mighty Brazilians 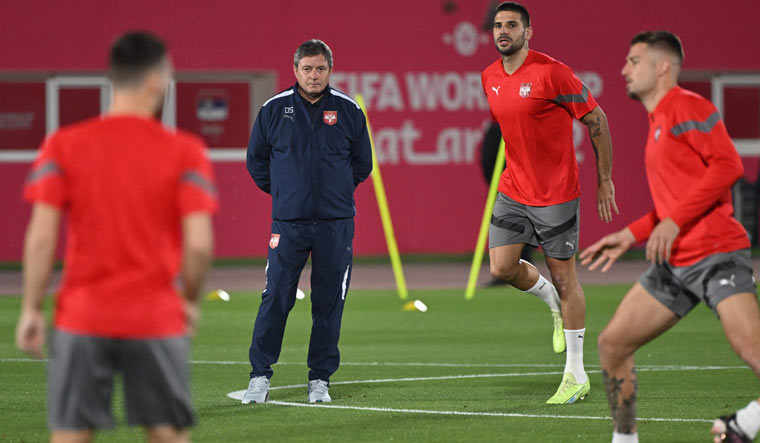 It is the final day of the first round of group matches at Qatar 2022. Brazil and Portugal are finally about to take the field. The situation in the two camps could not be more different. The Portuguese squad is, reportedly, based more than 30km from the city of Doha. The isolated camp was apparently set up to ensure that the team is disturbed as little as possible.

But that did not materialise, thanks to the circus around the now unemployed Cristiano Ronaldo—international media is said to have wreaked havoc at the camp, overwhelming security and leaving Portuguese journalists trying to cover their team's preparations out on the street. The Brazil camp, on the other hand, seems to be an oasis of calm.

However, it is difficult for Brazil fans to be calm. Apart from the expected excitement, there may well be fear. After all, the last two match days have seen rivals Argentina and European giants Germany fall to unfancied opposition. Portugal fans have been displaying confidence about their star-studded team's chances in a tough group, but you cannot blame them if a little doubt is creeping in as the kick-off gets closer.

So, here is a closer look at both Brazil and Portugal's underdog opponents in their tournament openers.

The Black Stars have struggled for form in 2022. But, they got to the World Cup by overcoming Nigeria on away goals after showing good tactical and defensive discipline. The other African teams, which have played till Nov 23, have been tough to break down. Senegal only lost their match to the Netherlands in the latter stages and the other two teams—Morocco and Tunisia—held stronger teams to goalless draws.

The same would be expected of Ghana, but it seems as if the head coach, Otto Addo, is not sure what his best team is. He has also tinkered with tactics in recent matches. The only thing that is clear is that he wants his team to be strong in defence. This strength is provided by Leicester City's Daniel Amartey, Strasbourg's Alexander Djiku and Southampton's Mohammed Salisu.

The star player is attacking midfielder Mohammed Kudus. He can play in central midfield, as a traditional No. 10, a false 9 or on the wing. Kudus can get goals from all these positions and has been impressive for Ajax this season. Adding attacking pedigree will be Athletic Bilbao's Inaki Williams, who recently switched from Spain to Ghana. Brighton and Hove Albion's Tariq Lamptey, who switched from England to Ghana, is another player to watch out for and Arsenal's Thomas Partey is the mainstay in midfield.

If Ghana, which is the lowest ranked team at the tournament (61), can get a result against Portugal, it will make Group H interesting. The clubless Portuguese captain though is a wounded lion and his team has multiple players who are capable of winning matches single-handedly.

Brazil are the best in world football. There are not too many teams which can trouble the South Americans, on paper. But, the most intriguing thing about Serbia is that, even on paper, the team looks capable of making things difficult for Brazilian defenders.

The quartet of Dusan Vlahovic, Aleksandar Mitrovic (both strikers), Dusan Tadic (attacking midfielder) and Sergej Milinkovic-Savic (central midfielder) is capable of unlocking even the most organised defence. Add to this, the industry and precise crossing of winger Filip Kostic, and it is easy to understand why Serbia have been picked by many as dark horses at the World Cup.

Serbia's plan has been simple since their footballing hero Dragan Stojkovic took over as head coach. Start on the frontfoot and score a goal. Then, score more goals. While this approach could lead to a resounding result, it will also leave Serbia vulnerable at the back. And that could lead to an utterly humiliating scoreline against a team of Brazil's calibre. Therefore, Stojkovic may opt to assign more defensive duties to his wide players.

Notably, Serbia routinely switch up their approach play—it can play through midfield, through the wings or play long balls to its physical strikers. However, both Mitrovic and Vlahovic are carrying injuries. So, Brazil may have caught Serbia at a good time.