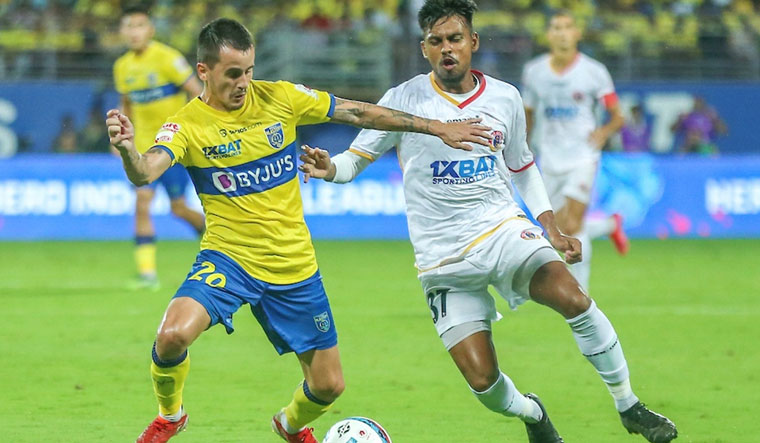 Ivan Kaliuzhnyi came off the bench to sprinkle stardust on the Indian Super League opener. The Ukrainian scored twice in just 10 minutes to fire Kerala Blasters to a 3-1 win over East Bengal at the Jawaharlal Nehru Stadium in Kochi on Friday.

It is often said in football that a moment of inspiration can decide a game. That moment for the Blasters arrived in the 80th minute when their head coach Ivan Vukomanovic decided to introduce their new signing Kaliuzhnyi.

Eight minutes before that Blasters’ talisman Adrian Luna had broken the deadlock when he held on to a long ball from Harmanjot Khabra and fired home from close range. Many thought that was the best of the match. But the best was yet to come. Kaliuzhnyi marked his arrival by collecting the ball from midfield, wading into the edge of the box before placing a brilliant ball into the corner with his right. Kerala Blasters fans went berserk.

For East Bengal, who had been passive for most of the match until then, the two late goals from the hosts were a shocker. Stephen Constantine had hoped to take a point from their hosts who had been dominant throughout. But Kerala’s hopes of finishing with a cleansheet vanished in the 88th minute when a failed clearance from a corner gifted Alex Lima a chance to shoot. And shoot he did.

ALSO READ: “We will give everything for this jersey and badge”: Kerala Blasters coach Ivan Vukomanovic

Lima fired home with his left foot to reduce the deficit. Briefly, the Blasters sensed panic. They were winning 2-1 but it wasn’t full-time yet and they had to hold on to the lifeline.

However, Kaliuzhnyi had other ideas. Blasters were gifted a late corner. Given the circumstances, most teams would try to waste time on the corner, but Luna swung one into the box, it was dealt with and the ball was loose. Then came the big moment, Kaliuzhnyi sensed a moment of brilliance and he took it. The youngster unleashed a vicious strike with his left foot that sailed past a hapless Kamaljit Singh in the East Bengal goal.

Blasters couldn’t have hoped for a better start to their campaign that ended with a loss in the final last season. However, they had waited long for the deadlock to break as East Bengal and bad luck kept out their repeated attempts to score. In the first half alone, Blasters had a handful of chances. Leskovic, Puitea and Giannou failed to hit the target.

The one shot that they managed to hit on target came late in the first half when a Luna free-kick dipped and nearly deceived Kamaljit, who had been brilliant before the Blasters’ goal rush began. East Bengal were second best throughout.

Their best moment had been the late goal, but it could have been an earlier chance from the same man, Lima. Lima had been presented with an opportunity after a rare slip up from Puitea let him through. He scuffed his shot and Prabhsukhan Gill saved.

(This story first appeared in Onmanorama)