The act shows awareness of the player, says Kaur 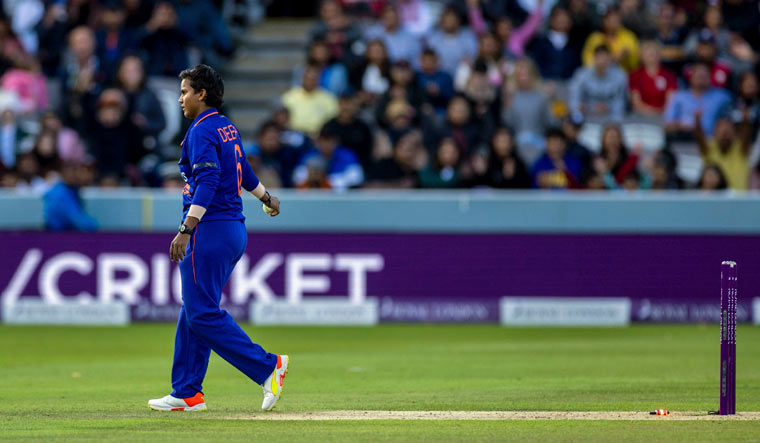 Throwing her weight behind all-rounder Deepti Sharma, who ran out England's Charlotte Dean at the non-striker's end during the final ODI match between India and England, Indian skipper Harmanpreet Kaur said that she will back her player and that her action shows the awareness of the player during the game. Harmanpreet was commenting on the 'Mankading' act during the post-match presentation.

After Deepti 'Mankading' Dean marked the end of the game, the social media platforms were filled with discussions on the act. The 'Mankading' act in cricket was always one of the most controversial rules.

The act of 'Mankading', named after Indian cricket legend Vinoo Mankad, is when the batter at the non-striker's end leaves the crease while the bowler is in the final delivery stride. If the bowler sees this action, he/she can legally attempt to run out that batter as per the laws of the sport. The running out act 'Mankading' came after Mankad ran out Australia's Bill Brown at the non-striker's end during the 1947-48 India's tour of Australia.

Though the debates and discussions are on saying it's against the spirit of the game, according to the rules of the sport it's legal.

England Captain Amy Jones during the post-match presentation said that she is not happy with the result. "We bowled really well, we just need a bigger partnership. The last dismissal divides opinion. I am not a fan but depends on how India feels about it. It is within the rules, hopefully, does not take the shine off the summer. A massive learning experience," said Jones.

Meanwhile, as per the updated playing conditions of the International Cricket Council (ICC), this method of running out will be moved on from the 'Unfair Play section to the 'Run Out' section following the laws.

With India's victory in the final match, Team India swept the ODI series 3-0. The last time the Indian women won an ODI series in England was in 1999.