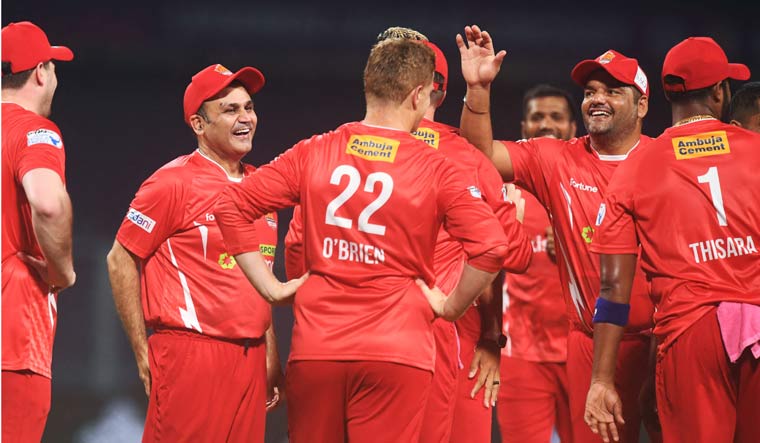 The Twenty 20 format in cricket has spurred the growth of multiple leagues in different corners of the world. With cricketers being in demand, it's no surprise that recently retired cricketers, too, want to join the fun. And so, you have the Legends League Cricket T20 Season 2 in India. It began on September 16 in Kolkata and the final is on October 5 in Cuttack.

The LLCT20 jamboree reached Delhi only for the rains to play spoilsport. The first match in the capital between Gujarat Giants and Manipal Tigers on Thursday was a washout. Friday being a rest day, the players took it easy – relaxing tired, aching muscles not used to playing competitive cricket any more. The league is, in fact, growing attracting more former cricketers to it; so much so that, Raman Raheja, CEO and co-founder of the league, announced that next season, two more teams were going to be added and the player count could well cross 110. He added that “next season, the likes of AB de Villiers, Eoin Morgan and such big names will be with us”.

The players might be well past their prime, but competitivemess remained intact, said former England spinner Graeme Swann. “It's brilliant,” he said. “It quite shocked me how competitive it is. I am looking forward to some sunshine.” Swann said the matches are being played with an intensity that made him glad he was batting at number 9!

Clearly, S. Sreesanth was the star attraction. The mercurial former pacer, who is presently foucusing on his acting career, said, “It is a very good standard of cricket. It's not like charity games that we take it lightly. I am really grateful I have got a chance to play cricket again.”

The first season took place in Oman in January this year, and had three teams: India, Rest of Asia and Rest of World. However, season 2 in India has four privately-owned teams and a roster of 80 players, including former stars like Jacques Kallis, Virender Sehwag, Harbhajan Singh, Irfan Pathan, Ross Taylor and Chris Gayle, among others.

Former Lankan spinner Ajantha Mendis feels any spinner with variation would be effective in T20 format.

The league is attracting eyeballs for sure. It has recorded 16 million-plus unique viewers on the digital streaming platforms in India and its digital footprints have also crossed 600 million fans across the world. According to the latest Broadcast Audience Research Council (BARC) TV ratings, the opening match of the season between India Maharajas and World Giants, played at Eden Gardens with the world’s greatest players taking part in it, garnered higher ratings than any other ongoing cricket league in the country. It is also five times more than the ratings of the entire last season of the Legends League Cricket. Streamed both on Hotstar and Fancode and broadcast on Star Sports, the numbers have surpassed even the organisers' expectations. “It’s amazing to see such great numbers,” said Raheja.