The two were seen crying together at Federer's farewell match 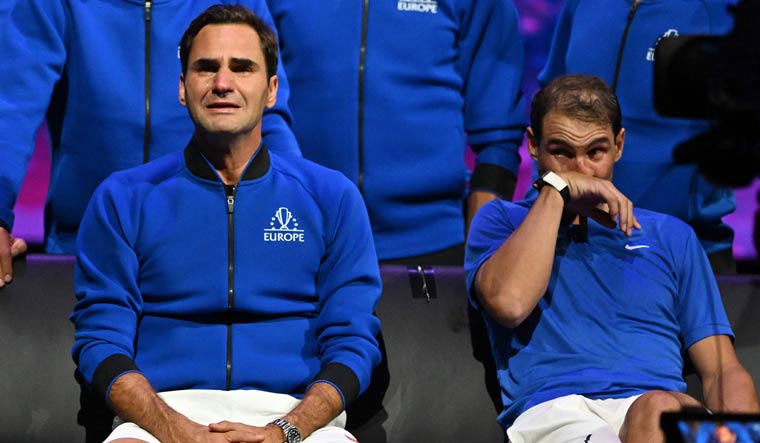 Holding hands and crying together, while sitting next to each other, Roger Federer and Rafael Nadal, the two biggest sporting icons, unknowingly, produced yet another unforgettable moment that will be recorded for posterity.

There was not a single eye that wasn't moist at the O2 Arena in London, the place where Federer bid a tearful adieu to the game during the Laver Cup.

It was an unforgettable and emotional moment.

The players who appeared to be made of steel and were driven by an indomitable spirit, were melting. There was no inhibition, no shame. Such was the occasion.

Tears trickled down his cheeks, and the sobs were loud as Federer began thanking his companions, his fans and family after playing his last game.

It was simply overwhelming, it was human.

The two, without an iota of doubt, are the most fiercest of players to have stepped on the tennis courts. The ones who redefined the game and showed how much a human body can be pushed or can achieve.

And yet they showed, inside those steely bodies they possessed child-like pure hearts that knew more than just the exhilaration of victory, and the agony and torment that accompanies defeat.

They showed that despite being fierce rivals inside the sporting arena, off it you could be respectful to your competitors. That they are more than just incredibly skilful artists.

It is this adorable and inspiring human element that catapults Federer and Nadal to a different pedestal in today's world, when hurling insult in the garb of aggression has become fashionable.

The humility of these two legends is like a balm for the soul.

While what they did with racquets in their hand will always be priceless teaching lessons for budding players, their public conduct and the way they carried themselves, is equally invaluable and worth emulation.

Indian cricketing icon Virat Kohli, too, gushed over their statesmanship.

"Who thought rivals can feel like this towards each other. That's the beauty of sport. This is the most beautiful sporting picture ever for me," Kohli tweeted with the a picture of the two.

"When your companions cry for you, you know why you've been able to do with your god given talent. Nothing but respect for these 2."

While tournaments are public events, where people can choose to hide their real selves and rather create an image, Federer's genuineness and humility has been testified by his tennis colleagues.

Recently a player revealed how inside the locker rooms, Federer won't speak without "please" and "thank you".

It's not that they did not have moments where they faltered, but maintaining decorum, grace and humbleness for over two decades, is simply amazing.

He possesses the toughest of shots, found impossible-looking angles with ridiculous ease, and yet arrogance was miles away from him.

He would pull off a magical shot but won't yell after executing that. Wearing a sweet smile, he would simply go back to the baseline and get ready for his next shot.

In a brutal sport that the game of tennis has evolved into, a persona like Federer, who not just won 20 Grand Slams but also the hearts of his rivals and a legion of fans, will be missed sorely.