T20 World Cup: What will be Team India's playing XI? 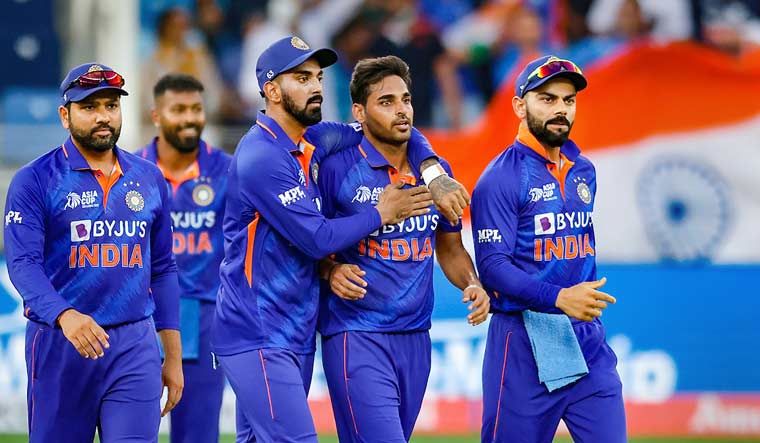 Six Twenty20 internationals – three each against visiting Australia and South Africa - are what skipper Rohit Sharma and coach Rahul Dravid have got to finalise their playing XI for the ICC Men's Twenty20 World Cup beginning next month in Australia. India's first match is against arch-rivals Pakistan on October 23 in Hobart.

The senior selection committee, on September 12, announced the squad for the tournament, and it remains to be seen in what shape or form some key players are before the tournament kicks off. Before doing a SWOT analysis of the squad, the much-repeated fact ought to be stated yet again. Both Sharma and Dravid, when annointed captain and coach respectively, had one main brief from the Board of Control for Cricket in India – win an ICC trophy. The last time Men in Blue stood as winners on the podium of an ICC event was in 2013 when they won the ICC Champions Trophy in 2013 under M.S. Dhoni's captaincy. Since then, under Virat Kohli's captaincy and Ravi Shastri's coaching stint, they have come close but not won the silverware in any ICC event.

This time around, the national selectors have played it safe by picking mostly “frontline” players, barring one or two. The surprise element was missing, as was a certain Mohammed Shami being kept on standby. He has been selected to play in both the home series versus Australia and South Africa. He has not played any white-ball cricket since the tour to England in July; it remains to be seen if he's at his best. He was one of the key players to help debutants Gujarat Titans lift the IPL trophy this season.

And so, the upcoming series against the visiting teams is crucial not just for the Indian team to get into groove but also individually for players.

The good news first – speedster Jasprit Bumrah and all-rounder Hardik Pandya are back in the side. Both are, without doubt, key personnel in Sharma's game plans. Also back is Harshal Patel. Seasoned Bhuvneshwar Kumar, who led the bowling attack in Asia Cup, is back in the scheme of things. Both Kumar and Pandya will not play in the SA series and will, alongwith Arshdeep Singh, instead report to the NCA in Bengaluru for “conditioning related work”. Pandya, who was the third seamer in Asia Cup, is expected to revert to his tried-and-tested role of fifth or sixth bowler who is also India's finisher with the bat.

Thus, India will be going in with a full-strength fast bowling squad versus Australia after a gap. Young left arm seamer Arshdeep Singh adds variety to the bowling unit. The pacers returning from injury will be keen to get “bowling fit” so that they hit the ground running in Australia.

India will feel the absence of injured Ravindra Jadeja but left-arm spinner Axar Patel will be more than handy with the bat in the lower order. Deepak Hooda is yet another pick as a spinner all-rounder though he did not get an opportunity to finish games in Asia Cup. It remains to be seen whether Rohit and Rahul pick Hooda ahead of Axar Patel in Australia. The bounce in the tracks down under may well decide that. But, before that matter settles down, there is also a certain Ravichandran Ashwin in the T20 WC team. Leg-spinner Yuzvendra Chahal, who was the leading wicket-taker in the last IPL, too, would be looking to up his effectiveness after a rather tepid Asia Cup, though he picked three wickets against Sri Lanka in the Asia Cup at crucial moments. On the big Australian grounds, Chahal's bowling will be an asset, as will be Axar's. That leaves the team management to decide whether they want a third spinner at all and, if so, who would that be.

But the pressing problem arises in the batting, that too at the top. India tried a more aggressive approach with the bat in the Asia Cup and it yielded results to an extent – be it Virat Kohli's much-awaited 71st international ton or Sharma's 41-ball 72 against Sri Lanka. But the coming two series at home will be crucial for the two batters, as they look to be among runs more consistently in that fashion and set the ideal platform for the Indian middle and late order to capitalise on. K.L. Rahul would be looking to regain his fluency with the bat, which has eluded him largely. Surya Kumar Yadav will be key to India's batting plans as he continues to strengthen his position in the line-up with his batting performances.

Sharma will find it difficult to choose the all-rounders in the playing XI. Apart from Hooda and Patel, there is Dinesh Karthik who is making a comeback of sorts. The wicketkeeper-batsman has been picked as a specialist finisher but he barely got chances in the Asia Cup. In the IPL, he had a death-over strike rate of over 220 while on the West Indies tour in July he showed the real substance. These six matches will be his last chance to show his new “avataar”.

The ball is now in the team management's court on who to pick in the playing XI for the T20 WC. The players have stated their cases and will be keen to send reminders again in the upcoming series.