The series will be held between November 18 to 30 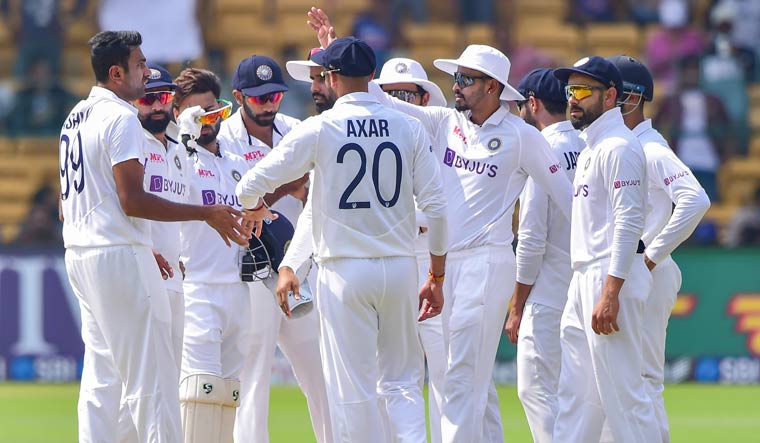 Ravichandran Ashwin celebrates with his teammates, the wicket of Sri Lanka's Kusal Mendis on the third day of second Test between India and Sri Lanka at the Chinnaswamy Stadium, Bengaluru | PTI

India will be touring New Zealand for a white-ball series comprising three T20Is and as many ODIs after the World T20 in Australia, New Zealand Cricket (NZC) said on Tuesday.

The series will be held between November 18 to 30 and New Zealand will return to India for a white-ball series in January next year.

"India will arrive in New Zealand at the conclusion of the world cup to play the BLACKCAPS in three T20s at Wellington, Tauranga and Napier, and three ODIs at Auckland, Hamilton and Christchurch," NZC said in a release.

"The BLACKCAPS will then depart for the sub-continent for a tour of Pakistan and a short form series in India, before returning in early February to prepare for the two Tests against England  at Tauranga (D/N) and Wellington."

India will be playing a rescheduled one-off fifth Test against England beginning on Friday, besides featuring in three T20Is and as many ODIs at the Old Blighty.

India will then tour the West Indies for a white-ball series comprising three ODIs and five T20Is in July-August in the run-up to the T20 World Cup.

In a jam-packed international schedule, New Zealand will also play a day-night Test against England, while six teams will be touring the country in the 2022-23 home summer.

Besides India, the other touring teams include Pakistan, Bangladesh, England and Sri Lanka men's teams, and Bangladesh women.

One of the prominent features of the schedule is England's series opener at Bay Oval, starting February 16  the first day-night Test in New Zealand since the BLACKCAPS defeated the same opposition by an innings at Eden Park in 2018.

The New Zealand women's team, after competing at the Birmingham Commonwealth Games and returning from their tour of the West Indies, will host Bangladesh in T20 and ODI series before departing in January for South Africa, where they will contest the ICC Women's T20 World Cup.