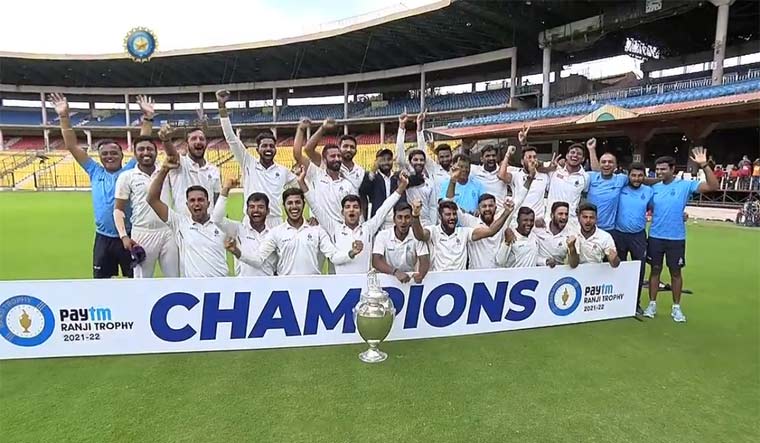 Wave of happiness spread through Madhya Pradesh on Sunday as the state cricket team created history by winning the maiden Ranji Trophy title, beating the Mumbai team comprehensively by six wickets at the final match played in Bengaluru.

Congratulations poured in from across the country and the state and an elated Chief Minister Shivraj Singh Chouhan announced that the winning team will be accorded public felicitation in a programme to be held in Bhopal.

The maiden win of Madhya Pradesh in the 88-year-old tournament, considered the most prestigious domestic cricket contest, is being looked upon as extra special because the losing team – Mumbai – has won the Ranji Trophy 41 times, the maximum in the tournament.

Interestingly, the winning MP team is coached by Chandrakant Pandit, under whose captainship the state team had reached finals of Ranji Trophy only other time in 1998-99. However, the team lost to Karnataka then. The current team is captained by Aditya Shrivastava of Bhopal.

Madhya Pradesh’s Shubham Sharma took away the man of match award after making 116 runs in the first innings and 30 runs in the second innings. Mumbai had given a modest target of 108 runs to MP in the fourth innings and the team achieved it by losing four wickets on Sunday.

In its journey to the final, the MP team had beaten Gujarat, Meghalaya, Punjab and West Bengal teams while it drew a match with Kerala.

Chief Minister Chouhan, who had been following the final match, congratulated the team immediately after the win. “Madhya Pradesh team has done a great job and scripted history by winning the Ranji Trophy for the first time by winning multiple times winner Mumbai. We are all overwhelmed and happy. I congratulate the team coach Chandrakant Pandit, captain Aditya Shrivastava and all other team members,” Chouhan tweeted.

He also said “the winning team will be accorded grand welcome and public felicitation in capital Bhopal. There will be a grand welcome to our cricketing stars who have created a new history.”

Ex-chief minister and MP Congress chief Kamal Nath also tweeted his congratulations. “Madhya Pradesh cricket team has created history by winning the Ranji Trophy for the first time. Entire Madhya Pradesh is proud of our team for this great victory. Congratulations to all the players for this grand win.”

Union minister Jyotiraditya Scindia, who had earlier been the president of MP Cricket Association, also congratulated the winning team. “Congratulations team MP on a truly historic win! You have recreated the history of the Holkar era! Well done coach Pandit, boys & team MPCA,” Scindia tweeted immediately after the win.

He also said “Heartiest congratulations to all players of team Madhya Pradesh and all citizens of MP and the country for the historic and unprecedented win at the Ranji Trophy finals played at Bengaluru. The team, which won the tournament through great performances in many aspects, has a beautiful mix of experience of chief coach Chandrakant Pandit, captainship of Aditya Shrivastav and the enthusiasm and rhythm of players like Yash Dubey, Shubham Sharma, Rajat Patidar, Gaurav Yadav, Anubhav Agrawal and Kumar Karitikeya.”