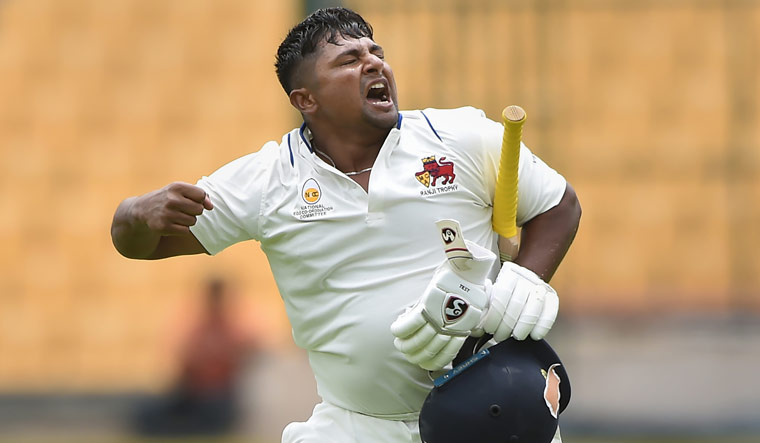 Mumbai's Sarfaraz Khan celebrates after scoring his century during the second day of the Ranji trophy final against Madhya Pradesh at M. Chinnaswamy Stadium, in Bengaluru | PTI

"This hundred is because of my abbu (father), his sacrifices and holding my hand when I could have been down and out," a teary-eyed Sarfaraz Khan choked in front of scribes while dedicating his best century to father and coach Naushad Khan.

Those who follow Mumbai cricket closely know how tough Naushad is on his sons Sarfaraz and Mushir (also in Mumbai squad), who don't have a life beyond cricket.

So, is the dream India call-up on the cards now? His eyes welled up while answering the question after his century lifted Mumbai to 374 against Madhya Pradesh in the Ranji Trophy final.

"In our lives, it's about all those little dreams that we harbour. The dreams that we (he and his dad) have dreamt together. The nearly 2,000 runs that I have scored in two seasons since my Mumbai comeback is because of my abbu," he said.

When there aren't any matches, the brothers train for good six to seven hours per day under their father's supervision.

He has had disciplinary issues, has not been the establishment's favourite child, and had to migrate to UP for a season before coming back and serving a cooling-off period before being picked for Mumbai again.

"Aap sab toh jaante ho mere saath kya kya huwa. Abbu na rahte toh main khatm ho jataa (You all know what I have gone through and had my father not been there, I would have been finished by now)."

"There has been so much of struggle and when I think how my dad dealt with all of it, I get emotional. He didn't leave my hand even once. My brother put up a status on his cell phone and I could see Abbu so happy. It made my day," he could finally manage a smile.

A fan of Sidhu Moosewala

Asked if his thigh thump celebration was imitation of Punjabi singer Sidhu Moosewala, who was recently gunned down by a gang, he said that was the idea.

"This was for Sidhu Moosewala. I love his songs and mostly me and Hardik Tamore (keeper) listen to his songs. I did a similar kind of celebration during an earlier match also (in his memory), but then, Hotstar didn't show it. I had decided once I score another hundred, I would repeat the celebration," the Mumbaikar said.

Planning and pat on back from selector

Sarfaraz is nearing 1,000 first-class runs for the season (937 currently) at a Bradmanesque average of 81.

"This is my best ever knock in Ranji Trophy as this is the final and it came when the team was in a troublesome situation. We were losing wickets at regular intervals.

"My aim was that whatever happens, I will not throw my wicket away even if it means I will have to play 300 balls. More balls I play, the bigger my knocks will be," said Sarfaraz, who scored 134 in 243 balls on the day.

A hundred in a Ranji final is special as it reminded him of carrying heavy kitbags in Mumbai local with father Naushad in tow, and also the hours of grind put in for years.

"When I was a little boy, the dream was to wear the Mumbai jersey and score a hundred. When I realised that dream, then I wanted to score a hundred in a Ranji Trophy final when the team is in a precarious position. That's the reason I was overwhelmed with emotion after the hundred," Sarfaraz said.

Sarfaraz said that once Shams Mulani was out in the first over, he had to change his game plan.

"Once Shams was out, I felt that there could be a collapse round the corner as the MP seamers were getting a fair bit of movement off the track. They were bowling good cutters but then I had a few partnerships which got me closer to the hundred," he stated.

While he didn't divulge what national selector Sunil Joshi might have told him about his senior team selection in future, he did mention that he was praised for beating MP's tactics.

"It was good talking to Sunil Joshi sir. He understood that Chandu sir (Chandrakant Pandit) had asked his bowlers to block my sweep shot and he said that it was good that I could rotate strike even when my pet shot was stopped."

His elation aside, Sarfaraz had a word of caution for his bowlers as he felt that a bit more disciplined would be required in the third morning to keep MP under a tight leash after they reached 123 for one in reply to Mumbai's 374.

"We need to be a bit more disciplined tomorrow but I can tell you that the game is far from over. And don't forget, they will have to bat last on this track.