'Tough conditions with the weather, but happy to get my first win of the season' 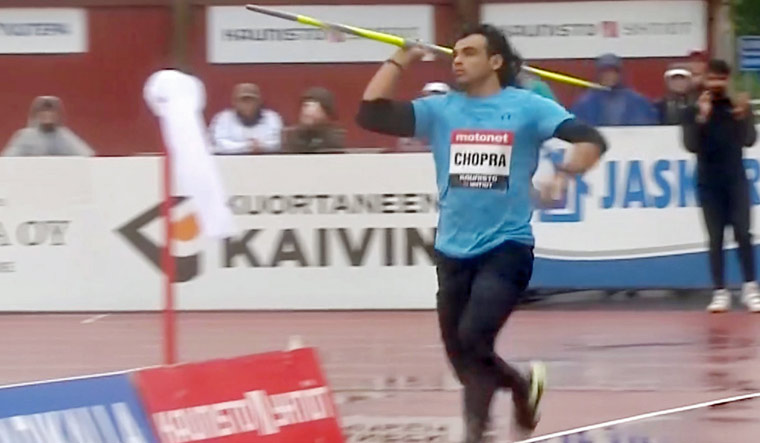 Track & field athlete Neeraj Chopra participates in the Kuortane Games 2022. Chopra won the gold medal with his throw of 86.69 metres | PTI via Twitter

Allaying fears of any injury during the Kuortane Games in Finland where he claimed his first win of the year, Olympic champion javelin thrower Neeraj Chopra said he is looking forward to starting his Diamond League season in Stockholm on June 30.

The 24-year-old Chopra slipped after his third attempt in Kuortane on Saturday. The conditions were treacherous for a javelin throw competition with a wet and slippery run-up due to rains. He lost his balance after releasing the spear in his third attempt and had a nasty fall with his left shoulder hitting the turf.

"Tough conditions with the weather, but happy to get my first win of the season here at Kuortane," Chopra wrote in an Instagram post.

"I am feeling good and looking forward to starting my Diamond League season at @bauhausgalan (Stockholm Diamond League) on the 30th."

His throw was not as big as the 89.30m effort while finishing second in the Paavo Nurmi Games in Turku, Finland, in a star-studded field on Tuesday but the win will surely boost his confidence ahead of the Stockholm Diamond League.

Athletics Federation of India (AFI) also said that "all is well" with Chopra.

"News from Kuortane: All well with @Neeraj_chopra1 after that bad slip on his third attempt. Nothing to worry. Well done #NeerajChopra, congrats for one more top class performance," the AFI tweeted.

Peters, who has been beaten by Chopra twice in four days, is leading the charts this season with his monster throw of 93.07m while winning gold in the Doha Diamond League last month. Chopra's 89.30m effort in Turku stands at fifth for the season.

Chopra had made a spectacular return to competition after his historic gold in the Tokyo Olympics with a stunning throw of 89.30m to shatter his own national record, which placed him second at the Paavo Nurmi Games.

Chopra's first competitive event after just over 10 months was nothing short of extraordinary as he nearly touched the coveted 90m mark, considered the gold standard in the world of javelin throw.