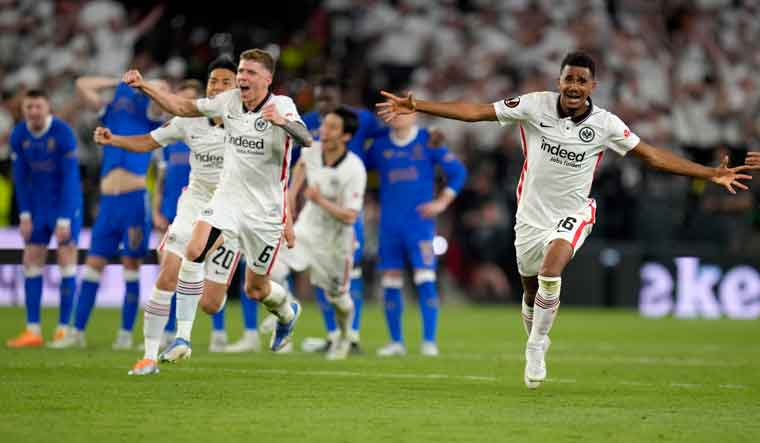 Eintracht Frankfurt defeated Rangers 5-4 on penalties to lift the Europa League trophy, ending a four-decade European trophy drought at Seville's Sanchez Pizjuan stadium. The German team went down by a goal before clawing back a 1-1 draw before 30 minutes of extra time and then penalties.

For Eintracht, for the fans, for the club, for the players, winning again after 42 years would be the most important thing ever, Frankfurt coach Oliver Glasner told UEFA.com. "It has extraordinary significance, great significance," he said. It will be Frankfurt's first European final since beating Borussia Mnchengladbach in 1980 in an all-German matchup in the UEFA Cup, the predecessor to the Europa League.

Rangers was close to European glory when it played in the UEFA Cup final in 2008, but it lost to Zenit St. Petersburg. The Scottish club is looking for its first European trophy since earning the Cup Winners' Cup in 1972.

Both clubs have huge fan bases, and tens of thousands are expected to swarm into southern Spain this week to try to see their team succeed again, prompting concern from local authorities and UEFA.

There had been fan violence involving visiting fans in Seville when local clubs Sevilla and Real Betis hosted matches earlier in the competition. Before the semifinals between Frankfurt and West Ham in Germany, more than 30 arrests were made after supporters of both clubs clashed in several locations in Frankfurt.

Fans of the German club also attracted headlines when more than 30,000 made their way into the Camp Nou in Barcelona for the second leg of the quarterfinals. UEFA has asked for fans without tickets not to travel to Spain for Wednesday's final, and warned about the dangers of purchasing tickets on the secondary market.