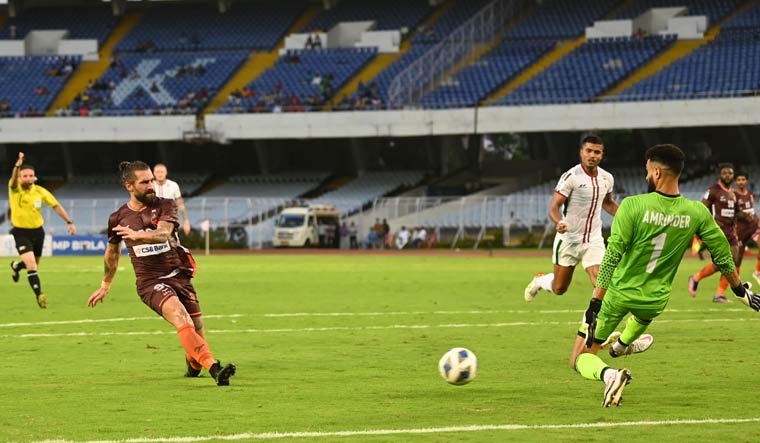 Riding high on their successive I-League triumph, Gokulam Kerala FC stunned ATK Mohun Bagan 4-2 in a six-goal thriller in their AFC Cup debut at the Salt Lake Stadium in Kolkata on Wednesday.

In a battle between the two heavyweights of the top-tier ISL and the second-tier I-League, Gokulam Kerala dished out a much more compact and technical display than Bagan.

Rishad Puthanveettil (57') and substitute Jithin Subran (89') slammed one each to seal three points and give a reality check to the ISL giants and the local favourites.

Mohun Bagan showed some spark with goals from Pritam Kotal (53') and Liston Colaco (80'), but their defence, in the absence of Sandesh Jhingan and Tiri, who was stretchered out after sustaining an injury in the 40th minute, crumbled in the second-half.

The win also gave the Malabarians an early advantage in securing the only available berth from group D for the AFC Cup Inter-Zone semifinals.

Playing in front of a strong home support, ATK Mohun Bagan squandered many chances in a dominating first half.

Fijian star centre-forward Roy Krishna missed back-to-back opportunities in the 18th minute - first a one-on-one from Liston Colaco's cross and then from Joni Kauko's assist, when the ball came off the inside of the post.

In the 29th minute, Kauko had a shot at the target from inside the box but the Finnish midfielder hit straight to Rakshit Dagar, as Gokulam Kerala had anxious few moments to begin with.

The two-time reigning I-League champions were cautious to start with in their maiden appearance in the continental showpiece, resulting in a goalless first half.

For the Mariners, who made an inter-zonal semifinal exit in the last edition, those were the few chances they had as the tables turned after the break.

The Vincento Alberto Annese-coached side struck thrice in the space of 11 minutes to virtually close out the game.

Gokulam's in-form Majcen, who was the team's top-scorer (13 goals) in the I-League, led its second-half domination to force Mohun Bagan defence into submission.

It was Emil Benny who initiated the move from outside the box to pass it on to Thahir Zaman on the right, setting it up for Majcen's strong finish.

In an action-packed second half, Mohun Bagan took just three minutes to equalise when Colaco's corner found Kotal right in front of the goal.

Majcen completed his double after Jourdain Fletcher won the ball from substitute Ashutosh Mehta to give a through ball to the Slovenian, who capitalised to make it 3-1.

Colaco reduced the margin with a stunning freekick to give the crowd a ray of hope, but Jithin came off the bench to score from a delightful one-two with Majcen to seal the issue in Gokulam's favour.