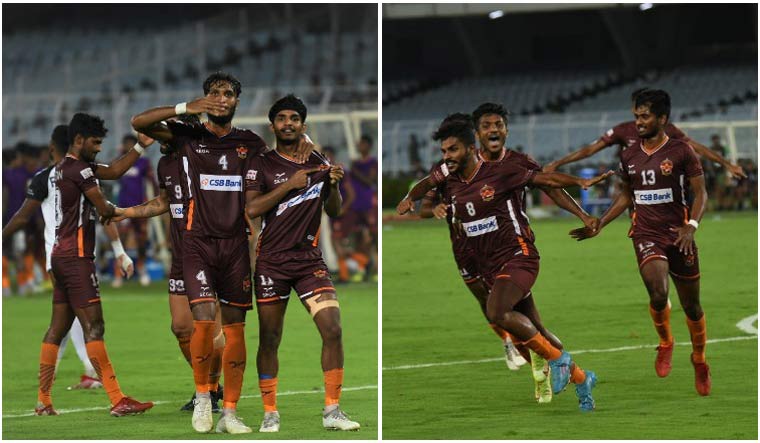 Gokulam Kerala FC defeated Mohammedan Sporting 2-1 at the Salt Lake Stadium in Kolkata, to clinch the I-League title | via Twitter

Fresh from winning the I-League title, a buoyant Gokulam Kerala team is faced with a new challenge as they take on star-studded local heavyweights ATK Mohun Bagan in the AFC Cup group D opener at the Salt Lake Stadium on Wednesday.

Last Saturday, the Malabarians became the first team to defend the I-League, when they edged out local giants Mohammedan Sporting 2-1 in the decider.

Three days later Vincenzo Alberto Annese's side will be up against a whole new challenge in the continental showpiece where they qualified by virtue of winning the last season's league.

In all, Annese's side won 13 matches, drew four and lost only once - in the penultimate round. They scored the highest number of goals - 44 - and conceded the least - 15 - in yet another perfect I-League season.

Slovenian centre-forward Luka Majcen, who was signed in the January transfer window when the league was suspended, has been their top goal-scorer with 13 goals to his kitty.

Apart from Majcen, their key Indian duo of midfielders Emil Benny and Muhammed Uvais along with the Afghan recruit Sharif Mukhammad, will be the key to their attack.

A win will give them an early advantage in securing the only available berth into the AFC Cup Inter-Zone semifinals.

Having stood out with most interceptions in the I-League, Cameroonian centre back Aminou Bouba (113) and Pawan Kumar (72) will spearhead their defence against a quality attack in Roy Krishna, David Williams and Manvir Singh.

"I've respect for all opponents but trust me you have respect for my team also. They must give everything tomorrow," said Annese.

Having achieved unprecedented success in the I-League, the Italian gaffer is unfazed by the gap between the I-League and the top-tier ISL teams.

"With budget you don't win football. It's a battle between XI versus XI on the field.

"Personally, I am a bit emotional, the budgets are different in ISL teams, and us. But budgets don't matter to players.

"I am very involved in this game, commitment, respect towards opponents are important but we will not make it easy for ATK. Tomorrow, we will play for a win," he said, giving a warning to their Kolkata rivals.

The Mariners, who have qualified by finishing runners-up in the last ISL, have already navigated past Sri Lanka's Blue Star SC and Abahani Limited Dhaka of Bangladesh to book their group stage slot.

With all the group matches slated at their home venue of Salt Lake Stadium, the Mariners will be high on confidence, while there will also be pressure to deliver with only one berth available from the group.

The team will be further bolstered by the return of their forward and defensive mainstays, Roy Krishna and Sandesh Jhingan, who missed the playoff stages.

"He has been training with the team for the last two weeks, he also played in the friendly game (against India). He's working all the time in training sessions. It's good for the team. I'm happy that everyone is ready for the match," coach Juan Ferrando said.

Bashundhara up against Maziya

In the second match of the day at the same venue, Bashundhara Kings of Bangladesh and Maldives' Maziya Sports & Recreation will be aiming to carry their domestic form into their AFC Cup clash.

The Bangladeshi outfit's skipper Topu Barman, who is down with an injury, will be missing the game.

"He's a key player of our national team. He's our captain. But despite having tough opponents, we are confident that it should not affect us too badly," Bashundhara Kings coach Oscar Bruzon said.

Maziya Sports are also well-placed in the Maldives Premier League, defeating Green Streets 4-0 last week to lead by five points, and head coach Miodrag Jesic said his team will play without any pressure.

"We come here without too much pressure, we want to show our quality on the field. We think we have a chance in the group stage, and there isn't any pressure on the players," said Jesic.