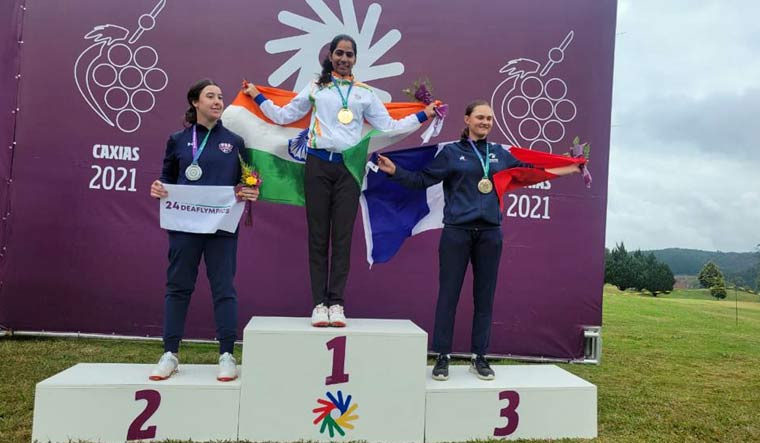 When she teed off her golf campaign at the Caxias do Sul, Brazil, at the ongoing Deaf Olympics 2021, Diksha Dagar knew exactly what she was aiming for. Left-handed Dagar defeated Ashlyn Grace Johnson for the gold, with a 5 and 4 in the final of the match play segment, meaning Dagar was leading by five holes with four holes remaining. The bronze went to Margaux Brejo of France. The 21-year-old from Gurugram, Haryana had finally laid the ghost of the 2017 Deaf Olympics to rest. Diksha has a hearing impairment and started wearing hearing aids at the age of six.

Speaking to THE WEEK from Brazil, after her gold medal win, Dagar said, “In 2017, I was leading from day one till the last hole of the final match, so was disappointed to lose the final that I should have won. I also missed the National Anthem at the medal ceremony. I am so happy I could cross the finish line. It is a very special moment in the life of an athlete to see the National Anthem being played,” said Dagar.

The experience of narrowly missing the gold medal in the previous edition had prepared her. What also helped her is that in the interim five years Dagar has competed at the Tokyo Olympics 2021, Asian Games 2018 and post turning pro in 2019, has won twice at the Ladies European Tour – once as an individual in 2019 and once as a team in 2021. “Even when we are certain, there are things that are needed to be done. I am lucky to have my family, my parents who actively support me and take care of a lot of things on and off the Golf Course. Coming into the final match, I was feeling quite comfortable, healthy and playing sharply from the beginning of the competition. Right now, I am confident about all aspects of my game,” said Dagar.

What also helped was her preparation for the event— she played with golfers on the Asian Tour (men's) to sharpen her game in Thailand. “I had reasonably good two weeks in Thailand. Playing with Asian Tour players in Thailand boosted my confidence in Deaflympics. The experience of playing International Golf on Ladies European Tour, Ladies Professional Golf Association (LPGA ) and Australia LPGA has been quite enriching. With the experience I have had, I feel I am better aware of match situations and feel a lot more comfortable.”

She was in top form going into the competition. She topped the stroke-play round with a score of 67-72 over 36 holes (two rounds of 18 holes) and reached the quarter-finals. There were 10 golfers in all.

With the gold at Deaf Olympics, done and dusted with, it is time now for Dagar to focus on her studies. Post that it will be back to the golf course and competitions. She is supported both by the Sports Authority of India, and the Indian Golf Union and is sponsored by the Hero MotoCorp. “Now I am going to finish my exams, then get on with the tournaments on Ladies European tour, where I am a member and have playing card. Training and playing on a Competitive tour is good preparation for Games like the Olympics and Asian Games. I have won here and I have won on Ladies European Tour, and I aspire to get more wins internationally.”