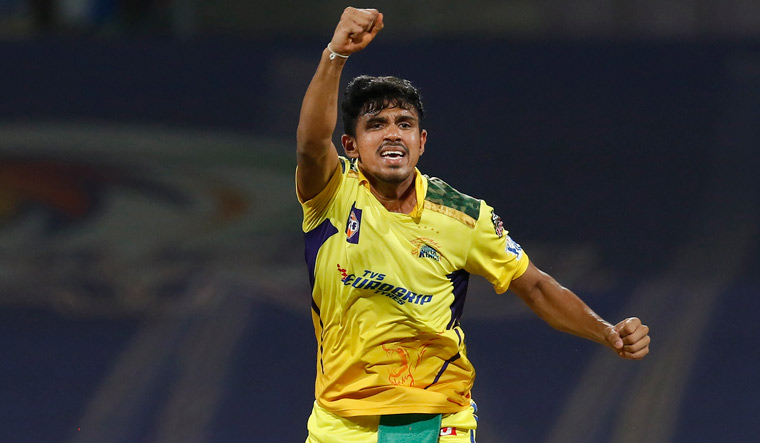 Maheesh Theekshana celebrates the wicket of David Warner of Delhi Capitals, during the Indian Premier League 2022 cricket match between Chennai Super Kings and Delhi Capitals, at the DY Patil Stadium in Mumbai, May 8, 2022 | PTI

He is the first player from Sri Lanka to be included in the Chennai Super Kings franchise since 2012.

Theekshana proved a right choice by picking up 12 wickets in 8 matches in his maiden IPL match.

Though he was in the U-19 squad of Sri Lanka in 2017-18, he was not given a chance to play because he failed in the fitness tests a few times.

The 21-year-old has narrated how being overweight stopped his dream of playing for his country and his struggle to overcome the crisis during his under 19 days.

“I was 107 kg at that time. So, I had to work harder to get my weight down. In 2020, I got everything down and got my fitness to the (required) level. I started more bowling, more hard work and in 2021, I got a chance to represent my country,” the CSK spinner said on CSK’s YouTube channel.

“In 2019, I had to be a water boy for 10 games in three-day matches. So I knew that if I failed, I would have to carry the water bottles again. But I kept believing in myself and had that never-say-die attitude. That's why I am here in 2022, " he said.


He reduced rice intake, avoided snacks, and also jogged at the Premadasa stadium.

Theekshana said he was inspired by former Sri Lanka spin bowler Ajantha Mendis. “In 2020, I had a chat with Ajantha Mendis, and in 2022, I spoke to MS Dhoni. I was with CSK last year as a net bowler. Never thought they would bid for me or pick me this year,” he added.

"Actually, I liked CSK because I like MS Dhoni very much. It's actually unbelievable, yesterday I played table tennis with him. It's more like a goal to play with him and to play under him now. He has a lot of skills, be it cricket, football, or table tennis. I think he can do anything. It is a dream come true to play here," the spinner said.