How Ajaz Patel's switch from pace to spin changed his fortune 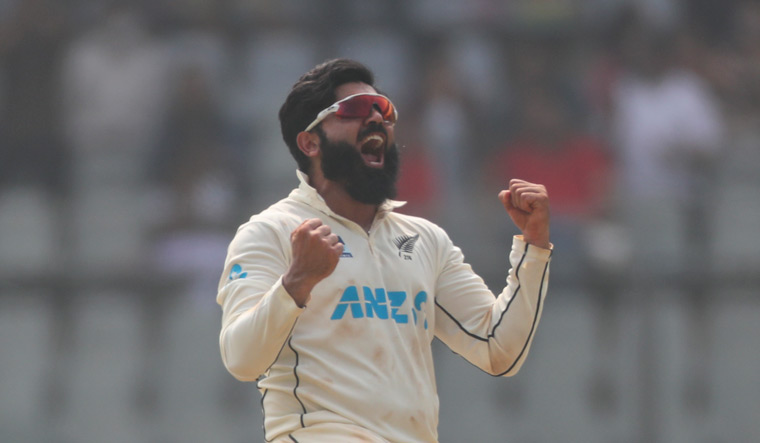 If shifting from India to New Zealand saw him fall in love with cricket, switching to spin from fast bowling paved the way for Ajaz Patel's entry into the game's top-flight.

The shift and switch both worked wonders as he became only the third bowler in Test cricket's 144-year-long history to take all 10 wickets in an innings.

A fast bowler growing up, the late bloomer's talents became apparent only after he started bowling spin.

Standing at 5 feet 6 inches, he realised he wasn't quite going to make it as a pacer, which explained the switch to spin in his 20s, years after his parents emigrated to New Zealand.

When the Patels left their house in the city's Jogeshwari area for New Zealand in 1996, he was only eight years old. In the new environs, he fell in love with the game and worked towards earning a name for himself.

By picking all 10 wickets, the Mumbai-born Ajaz on Saturday joined Jim Laker and Anil Kumble.

He also surpassed the great Richard Hadlee to record the best figures by a New Zealand bowler. Hadlee had taken nine for 52 versus Australia back in 1985.

The rise to prominence is nothing short of spectacular for the man, who has had no qualms admitting that his "hands were shaking" with nervousness when he was first handed the ball in Test cricket.

The cricket fraternity was quick to laud the incredible achievement of the 33-year-old left-arm spinner, and so were his family members who still live in Jogeshwari.

Ajaz's family owns a house in Jogeshwari. His mother used to teach at a school near Oshiwara, while his father was in the refrigeration business.

"It's a proud moment for the entire family. We were expecting a good performance but this is exceptional. It's sad that I couldn't be at the ground to watch this feat live. I had work and had to come to office and I watched in on TV," Owais Patel, Ajaz's elder cousin who lives here, told PTI.

"Our families are very close and only last year, we had visited them in New Zealand. I have spoken to him after he landed in Mumbai. Still not sure but plan to meet him after the Test match," he added.

Before the COVID-19 pandemic struck, Ajaz's family would often spend their holidays in India.

Thanks to his former Kiwi teammate and Mumbai Indians pacer Mitchell McClenaghan, he would would often come to watch the team's Indian Premier League matches at the Wankhede Stadium and has also bowled to them on a few occasions.

Ajaz extracted sharp turn and bounce from the pitch and carried the New Zealand bowling on his shoulders to restrict the home team's first innings total to 325.

As he went about running through the Indian batting line-up with his guile, turn and accuracy, some of his family members were cheering for him from the stands.

Long before he got to savour his biggest moment in the game, it was former New Zealand spinner Dipak Patel, who encouraged him to leave pace and take up spin bowling. Dipak was then the coach of the New Zealand U-19 team.

In New Zealand, Ajaz began his career with Auckland, but it was only after he made a move to Central Districts that the player started to showcase his skills.

Ajaz played for Auckland A without much success, and then, moved to Central Districts, where he was fast tracked into first class cricket and made his debut in 2012.

He made his T20 debut also in the same year but had to wait for three more years to play 50-over cricket.

His rise in international cricket was built on success at the domestic level.

Ajaz kept on taking wickets consistently and he was finally rewarded with a New Zealand call-up in 2018 after 16 five-fors and three 10-wicket hauls.

It came after a lot of hard work and intense competition from the likes of the already established Mitchell Santner and Ish Sodhi.

But once he found his footing in the top-flight, he was on his way.