The former Barcelona manager is the frontrunner after Pochettino denies interest 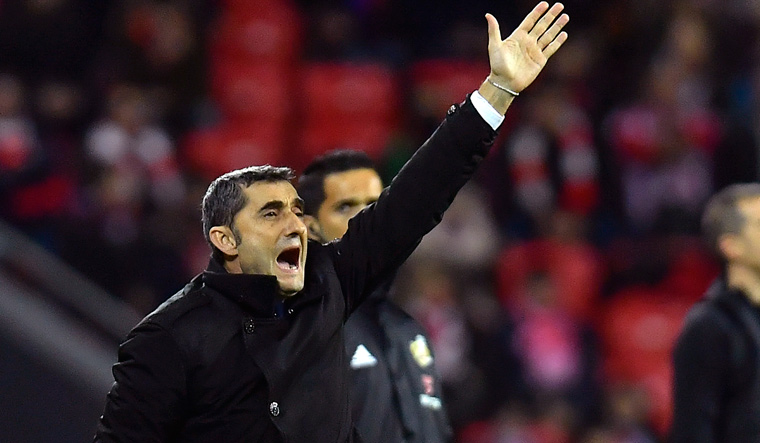 With the departure of Ole Gunnar Solskjaer, Manchester United are scouting for his replacement while Michael Carrick oversees coaching duties until then. According to a report, the 20-time English champions are looking to recruit former Barcelona head coach Ernesto Valverde on an interim basis until the end of the season.

According to The Guardian, the club's football director John Murtough has contacted Valverde and discussions are on. The 57-year-old Spaniard has already conveyed to the club the players he would need this January to bolster the flailing team.

Valverde is currently available, his last job being the one at Barcelona. He spent three years at the club, winning two La Liga titles and a Copa del Rey before he was sacked in January 2020.

United are intent on signing an interim manager only for this season before a decision is made for a permanent one in the summer of 2022.

…to be clear, Ernesto Valverde would only be considered as ‘interim’ option - in case Manchester United won’t be able to appoint a permanent manager right now like Pochettino or Rodgers. 🔴 #MUFC

Valverde is supposedly one of five candidates that United are considering for the highly coveted job, with the likes of PSG's Mauricio Pochettino and Leicester City's Brendan Rodgers also on the shortlist. Former Real Madrid coach Zinedine Zidane is also rumoured to be on United's radar, but the French legend has reportedly declined to work in England.

Over the last few days, there has been much talk of Pochettino showing interest in a return to England, where he is highly regarded for his six-year stint at Tottenham Hotspurs.

Pochettino's relationship with the PSG higher-ups is said to be fraught as the two parties do not see eye-to-eye on player signings and tactical decisions.

But the Argentine quelled rumours of him moving to Manchester, when he was asked about it at a press conference ahead of PSG's Champions League match against Manchester City.

“We are in a business where the rumours are there, I completely understand what is going on—sometimes in a positive way and sometimes in a negative way. This type of thing cannot distract [us].”

Though Pochettino was United's first choice to fill the hot seat, Valverde is choice number two, considering his experience of working with Lionel Messi and Barcelona.

He has also won trophies with Olympiakos and Athletic Bilbao and in 2007 led Espanyol to the UEFA Cup final.