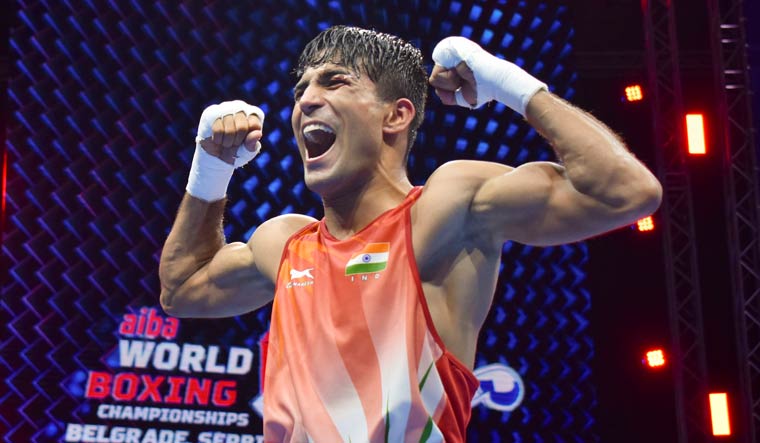 Hardened by the difficult circumstances of his personal life, young boxer Akash Kumar (54kg) secured India's first medal at the ongoing AIBA Men's World Championships on Tuesday by advancing to the semifinals with a superb win over former Olympic silver-medallist Yoel Finol Rivas of Venezuela.

The 21-year-old Akash prevailed 5-0 with a fabulous performance which was a perfect mix of powerful punching and great showmanship. He was the only Indian left in the fray after four others bowed out with quarterfinal losses.

The fearless youngster scored on counter-attacks with a non-existent guard and taunted his opponent, all this while staying out of his range with terrific pace and footwork. Even a cut above his eye could not slow him down or force him to raise his guard.

"My strategy was to attack from word go, I took the first round with that and in the second, I had to protect my cut as well, while going forward, which I managed to do," Akash said after the triumph.

A product of the Army Sports Institute in Pune, the Services boxer lost his mother to a lung infection in September and competed in the national championships unaware of the tragedy.

While Berwal was out-maneuvered by Azerbaijan's Mahammad Abdullayev. Berwal lost 0-5, Thapa, who was aiming to become the first Indian male boxer to claim two medals at the world event having fetched a bronze in the 2015 edition, was beaten on pace and aggression by Turkey's 19-year-old Kerem Oezmen in the quarterfinals. Thapa lost 0-5.

A very gritty Nishant troubled Russia's Vadim Musaev quite a lot with his fantastic hand speed and never-say-die spirit but just could not match him on impactful punching, eventually going down 1-4.

Sanjeet (92kg), who was a quarterfinalist in the event's last edition, ended at the same stage once again, losing to Italian Aziz Abbes Mouhiidine.

But Akash ensured that India had something to celebrate even though the two medal feat of the last edition could not be repeated this time.

The world championships is Akash's maiden senior international tournament, which makes his performance all the more special.

His father died more than a decade ago after initiating him to boxing and his brother is in jail since 2017 in connection with a murder case.

But determined not to be defined by his difficult circumstances, Akash became only the seventh Indian male boxer to secure a world championship medal and is now also assured of a prize money of at least $25,000.

"I dedicate this medal to my late mother and father and my coaches. I competed in such a big tournament for the first time in my life and I feel so proud to have done well," Akash said.

"His performance has earned him a lot of respect from his opponents. For a debutant, he showed tremendous confidence against boxers who were far more experienced," added India's High Performance Director Santiago Nieva.

Rivas had originally won a bronze in the Rio 2016 Olympics but his medal was upgraded to silver after the original second-place finisher failed a dope test.

Akash will be up against 19-year-old Makhmud Sabyrkhan of Kazakhstan, a three-time Asian gold-medallist at the youth level.

The gold winners at the showpiece will walk away with a prize money of $100,000.

The silver medallists are to be given USD 50,000, and both bronze-medallists will be awarded $25,000 each. The total prize purse stands at a whopping $2.6 million.

India is being represented by its reigning national champions across weight categories.