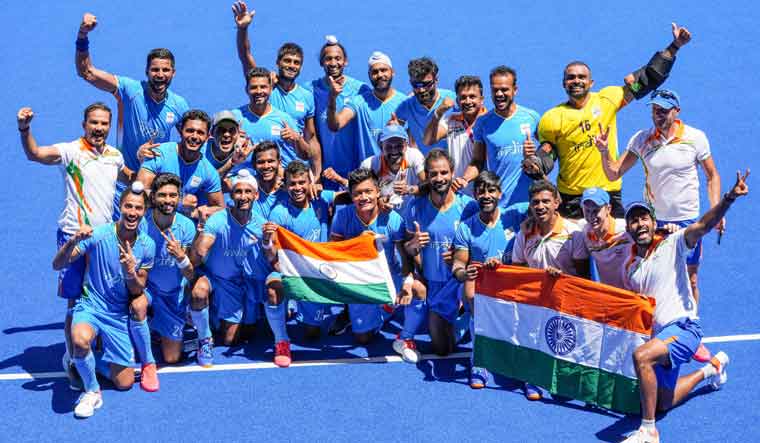 Indian players pose for photographs as they celebrate their victory over Germany in the men's field hockey bronze medal match, at the 2020 Summer Olympics in Tokyo on Thursday | PTI

Hockey India (HI) has asserted that Belgium's public expression of displeasure on Indians sweeping the FIH annual awards is nothing short of "racial discrimination" and the world body should initiate a thorough investigation into the matter.

In a strongly-worded letter to International Hockey Federation (FIH) CEO Thierry Weil, HI President Gyanendro Ningombam said that Belgium and its players questioning the voting system was disrespectful towards the Indian winners and demeaning their achievements.

"The public statements of displeasure at the announcement of the Indian winners is highly disrespectful and not in the spirit of sportsmanship and the sport of hockey," Ningombam wrote in the letter.

"The objections on behalf of Belgium Federation for 2021 winners needs to be carefully examined by the FIH Governance Panel for what is considered by myself as a case of discrimination/racial discrimination."

Ningombam said the lndian players and coaches have legitimately won the polls in most cases across all categories but the achievement has been totally undermined by negative comments by fellow athletes and national associations.

"ls it fair that the hard work and efforts of these athletes are being scrutinised and they are being put through such harassment and mental intimidation?" he asked.

India swept the FIH annual awards on October 6, claiming all the top honours based on a voting system which was lambasted as a "failure" by men's Olympic champions Belgium, prompting the FIH to say that it would try to figure why some associations did not cast their ballot.

Five Indian players and the head coaches of both the men's and women's teams in Tokyo claimed the top honours across different categories after fetching the maximum votes. The men's hockey team had won a bronze, its first in 41 years, in the Tokyo Olympics, while the women's side had finished an unprecedented fourth in the showpiece.

The HI president asked Weil to request the Belgium federation to issue an official public apology for the "demeaning" comments on the achievements of the lndian players and coaches on social media.

"If not, refer this matter to the FIH Governance Panel for thorough investigation into what is discrimination/racial discrimination against the lndian athletes and coaches."

After Belgium questioned the voting system, the FIH had pointed out that the Indian award winners topped each of the voting groups that also involved the national associations and media.

It had also said that only 19 associations from the 42-strong European bloc cast their votes, compared to 29 out of 33 in Asia.

Votes from National Associations - represented by their respective captains and coaches - accounted for 50 per cent of the overall result, while fans and players (25 per cent) as well as media (25 per cent) made the other half of the votes.

"Hockey lndia made great efforts to ensure good participation across all categories from our country and now feel publicly penalised for the full hearted participation and support of the lndian nominees.

"It is disappointing that the Belgium Federation would prefer to question the voting system and the legitimacy of the lndian winners then actually take responsibility for not encouraging more voting and supporting their athletes in the first place.

"The core of the matter is that these national associations need to first introspect to see their actual level of participation and interest right from the start instead of now questioning the system once results are announced not in their favour."

He also pointed out that Belgium federation had secured winners after the 2016 Rio Olympics even though they finished second and gold medal-winning Argentine team did not get a single award.

"All awards in men (after 2016 Olympics) went to Belgium, then there was no questioning of the voting system," he said.

Ningombam also said "it's shameful that European Hockey Federation is sitting quiet and not taking responsibility for the lack of activation and seriousness in voting by their Member Associations while also allowing their athletes and Member Associations undermine the results and showing disrespect to the winners".

Weil had on Monday said that the FIH would create a task force to work on its global awards selection process but asserted that the winners wouldn't have been different even without fans' votes.