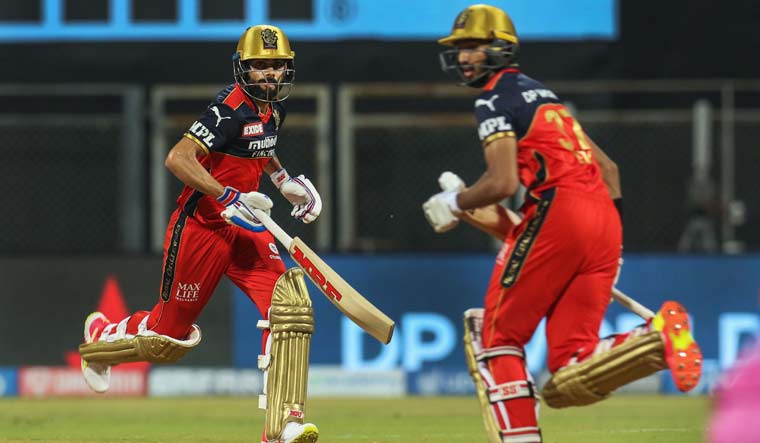 Opener Devdutt Padikkal hit a brilliant century while skipper Virat Kohli made a solid 72 to guide Royal Challengers Bangalore to a commanding 10-wicket win over Rajasthan Royals in the IPL 2021 match in Mumbai.

Chasing 178, Padikkal stormed to his maiden IPL hundred, smashing 101* off just 52 balls, with six sixes and 11 fours. Kohli was content playing the second fiddle but picked up pace towards the latter half of the innings to remain unbeaten on 72 off 47 balls, with three sixes and six fours. The RCB skipper also crossed 6,000 runs in his IPL career during the knock.

But it was Padikkal who starred with the bat. Having had a lean outing with the bat in the first three matches, the 20-year-old made good use of some ordinary bowling from RR to become the youngest player to score a century in a run chase in IPL.

It was also RCB’s highest partnership in a chase.

On a good batting surface, Royals were helped by a counter-attacking effort from all-rounder Shivam Dube (46 off 32 balls) which stemmed the rot and big-hits from Tewatia (40 off 23 balls) that helped them get past 175-run mark.

Dube smashed two sixes and five fours and with Riyan Parag (25 off 15 balls) giving him good support, and added 66 runs for the fifth wicket off only 6.2 overs to give his team's total some semblance of respectability.

While the giant all-rounder was comfortable playing at "home", using the pace of deliveries, the profligate top-order of Royals once again flattered to deceive along with their skipper Sanju Samson, who has been "consistently inconsistent".

For RCB, Mohammed Siraj's (3/27 in 4 overs) off-cutter first-up cleaned Jos Buttler (8) and Manan Vohra (7), with another atrocious shot selection off Kyle Jamieson (1/28 in 4 overs), might have ensured a lengthy spell for himself in the dug-out.

Siraj then unleashed a perfect toe-crusher for David Miller (0) as skipper Virat Kohli made a perfect call for DRS.

Samson (21 off 18 balls), maintained his IPL tradition of fizzling out after one or two good knocks as a six off Washington Sundar was followed by an indiscreet chip shot at mid-wicket.

Dube hardly used his feet as the two sixes in one over from Yuzvendra Chahal (0/18 in 2 overs) over long-on forced Kohli to take his leg-spinner out of attack. In case of fast bowlers, he used the ramp shot when anything short was bowled on off-stump channel.

The shot that stood out was played by Parag, a whip to the mid-wicket boundary off Harshal Patel (3/47) before getting out in the same over.

Kane Richardson (1/29 in 3 overs) then denied Dube on what would have been a good half-century as Tewatia upped the ante in the final overs along with Chris Morris.