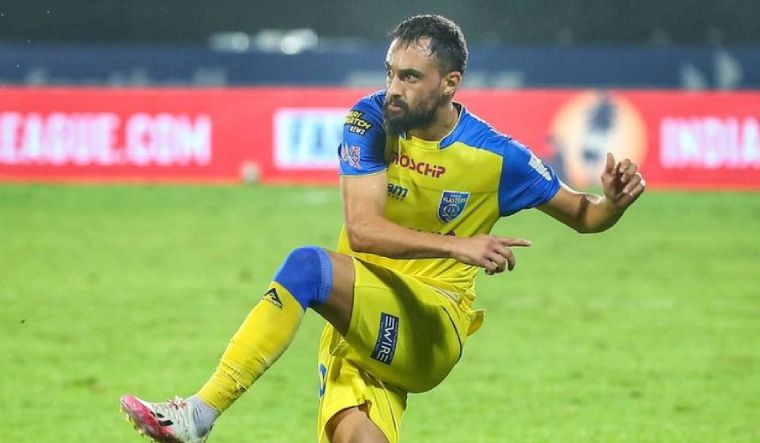 Facundo Pereyra is ‘temporarily out from a broken nose,’ KBFC said | via Instagram/@keralablasters

Indian Super League franchise Kerala Blasters FC have confirmed that their midfielder Facundo Pereyra will be out for an extended period as he broke his nose before the match against Jamshedpur FC on Wednesday.

The Argentine is said to have undergone surgery and is being monitored by the medical staff, the club said in its website.

“Facundo is temporarily out from a broken nose. The doctors are doing their best to help him recover and be ready to play as soon as possible. This is a moment where we should all stay strong together. Facundo will be back to help the team as soon as possible.” said Karolis Skinkys, Sporting Director, Kerala Blasters FC.

The club also took to social media to make the announcement, sharing a picture of Pereyra. On the Blasters’ Instagram stories, the account shared a picture of the midfielder with his nose bandaged. The club wished him a speedy recovery, adding that he will be “back in Yellow” soon.

The Blasters’ run of bad luck continued as Jamshedpur held the Kerala team to a goalless draw in their latest ISL encounter. Kerala is placed ninth in the standings with 15 points from 14 games.

Kerala Blasters have conceded the most goals in the league (22) and have kept just one clean sheet in their previous 10 games.