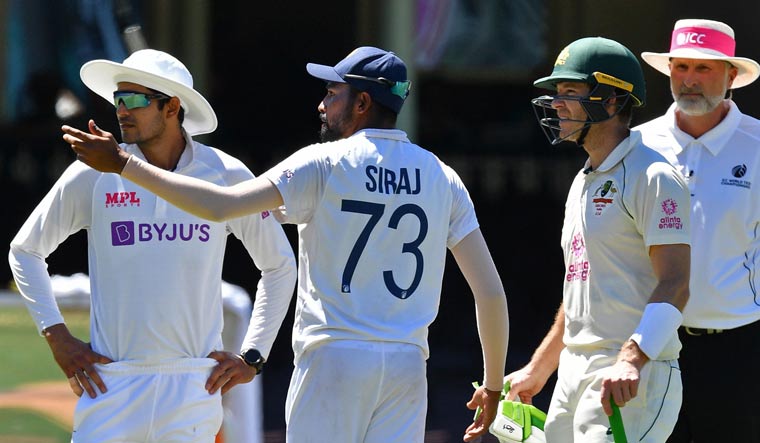 India fast bowler Mohammed Siraj on Thursday revealed that on-field umpires had offered his team the option of leaving the third Test against Australia midway after he was subjected to racial abuse by the crowd in Sydney, a proposal that was turned down by skipper Ajinkya Rahane.

Siraj, called a "brown monkey" by some spectators, had reported the matter to Rahane, who brought it to the notice of on-field umpires Paul Reiffel and Paul Wilson during the match.

"I faced abuses in Australia. The case is going on, let's see whether I get justice or not. My job was to report the incident to the captain," the 26-year-old, who was India's highest wicket-taker with 13 scalps during the historic 2-1 series win, said during a press conference after his arrival here.

"The umpires offered us to leave the game but Rahane bhai said we won't leave the game. We did no mistake, so we will play," he recalled about the match that was halted for a few minutes on the fourth day and ended in a thrilling draw.

He said the unruly crowd behaviour acted as a morale-booster for him during his debut Test series.

"The abuses which I faced in Australia made me mentally stronger. I didn't let them affect my game," Siraj said.

Six spectators were expelled from the stadium after play was held up during the match. Cricket Australia has promised the strongest possible action against those found guilty.

Siraj turned out to be one of the architects of India's historic Australia tour and successfully stepped into the shoes of his senior pace colleagues after making his debut in the series-turning second Test in Melbourne.

But the right-arm pacer said it's just the start and he can't afford to relax a bit if he desires to play for India for a long time.

"I never thought like that (I will replace senior bowlers). But when senior players got injured, the entire team was banking on me to do well. It was challenging and there was pressure on me as well," he said describing the moments before his debut Test.

"(But) I can't relax. I want to play for India and keep on performing. I need to continue from here. I don't want this to get to my head. I need to set my future goals.

"I need to take this confidence into the next series (against England). Whatever role the team management gives me (in England series), I will do my best," he added.

"IPL 2018 was a bad season for me, but the entire RCB team and Virat bhai backed me. RCB retained me and Virat bhai told me 'you have the potential, just keep on doing things what you do best, don't think much'," he said.

He also said that Jasprit Bumrah too backed him immensely in Australia.

"Bumrah bhai supported me from the other end. He asked me not to try much and keep the ball in one area, don't think much."

Asked who is a better Test captain Kohli or Ajinkya Rahane, Siraj played it safe.

"Both are good captains. Ajju (Rahane) bhai always trusted youngsters, gave confidence to us, which is needed for a youngster. I enjoyed both of theirs captaincy," he added.