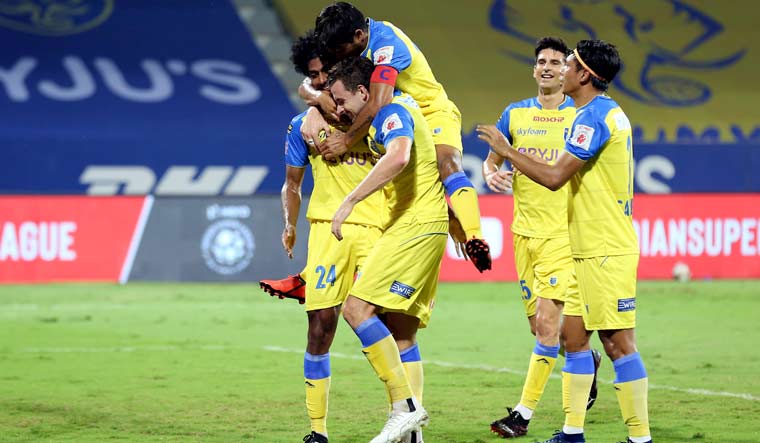 Abdul Hakku of Kerala Blasters (extreme left) celebrates with teammates after scoring a goal during a match of the Indian Super League against Hyderabad FC, at GMC Stadium, Bambolim in Goa | PTI

A long-awaited performance and a long-awaited result! Beating one of the standout performers in the league for the first win of the season is a remarkable achievement indeed.

Kerala Blasters' 2-0 victory over Hyderabad FC on Sunday was made sweeter by the fact that their young Indian recruits grabbed the opportunity and used it to the hilt.

When I saw Blasters' starting line-up, my heart skipped a beat. There was no Bakary Kone or Costa Nhamoinesu. The backline consisted of only Indians, that too young and inexperienced players. I asked myself: How is this defence going to stop a top player like Aridane Santana?

But the young guns repaid the faith reposed in them by the coach and proved the  doubters, including me, wrong. The likes of Abdul Hakku and Sandeep appeared assured and confident and came up with some spectacular tackles and interceptions. Their fighting spirit and resoluteness rubbed off on teammates. It was gladdening to see the midfielders and the forwards playing with a newfound energy and confidence.

I am thoroughly impressed by the performance of Argentine midfielder Facundo Pereyra. He rarely allowed the ball to pass by and tirelessly covered every blade of grass for the full 90 minutes. It was his tenacity and supreme ball control that helped Blasters dominate the play around the centre of the pitch.

The difference in the team's approach was obvious in the second half. Hyderabad started aggressively by keeping possession and attacking relentlessly, but Blasters were not ready to sit back and defend their narrow lead. They maintained a positive attitude and made serious efforts to score again.

Playing as a cohesive unit, it was an entertaining exhibition from the Blasters. Their fans have been cheering and praying for a win since the start of the season, and now the prayers have been answered!