India were restricted to their lowest ever total in Test cricket 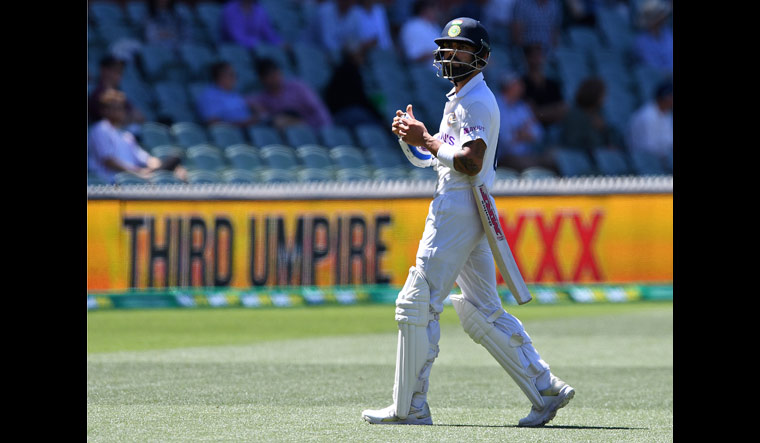 In an embarrassing turn of events, India were restricted to their lowest ever total in Test cricket, collapsing to 36/9 in the terminated second innings, leaving Australia with just a 90-run target on the third day of the first Day/Night Test in Adelaide on Saturday.

Chasing the easy goal, Australia reached 15 for no loss at dinner break and are expected to complete formalities into the second session.

To make matters worse for India, star pacer Mohammed Shami's series could well be over due to a wrist injury from a short ball from Pat Cummins, which could potentially be a fracture. Shami could not continue and the Indian innings was terminated at 36 for 9 in 21.2 overs.

India's earlier lowest score was 42 at the Lord's in 1974 against England, known in Indian cricket parlance as "Summer of 42". This is also the lowest score in the brief history of D/N Tests and the joint fifth lowest overall.

The likes of Sunil Gavaskar and the late Ajit Wadekar had long carried the baggage of that English Summer, inarguably one of the worst in the annals of Indian cricket. It will now be replaced by the "Summer of 36".

Call it irony, but just like Gavaskar then, a modern day great like Virat Kohli will have this bit of avoidable history in his legacy, a day when one could hardly figure out what went wrong.

At one stage, India were reduced to 26 for 8 and looked like equalling the lowest ever Test score (26 by New Zealand) but Hanuma Vihari's boundary helped them evade entry into the dark pages of cricketing history.

The Indian batting was completely exposed by the extra bounce generated by Australian pacers, who bowled every delivery on the off-middle channel after landing on the seam.

In an inexplicable collapse, India's much vaunted batsmen fell like nine pins with not a single one able to reach double figures.

Once nightwatchman Jasprit Bumrah (2) was out in the first over, the home pacers, led by Josh Hazlewood (5-3-8-5) and Pat Cummins (10.2-4-21-4), literally decimated the tourists and also caused lasting damage to their pride.

The likes of Mayank Agarwal (9), Cheteshwar Pujara (0) and Ajinkya Rahane (0) were all out in similar fashion.

All the deliveries were almost identical, angled in, which forced the batsmen to jab at them and just bounced a wee bit more. They deviated a shade taking outside edges to Tim Paine behind the stumps.

Kohli (4) was dismissed in the manner he used to get out in England back in 2014, trying to drive a delivery on the fifth stump and caught at gully.

To sum it up, the Indian batsmen failed to factor in the pitch suddenly becoming more livelier with extra bounce.

Australia 1st Innings: 191 all out

Jasprit Bumrah c and b Cummins 2

Umesh Yadav not out 4