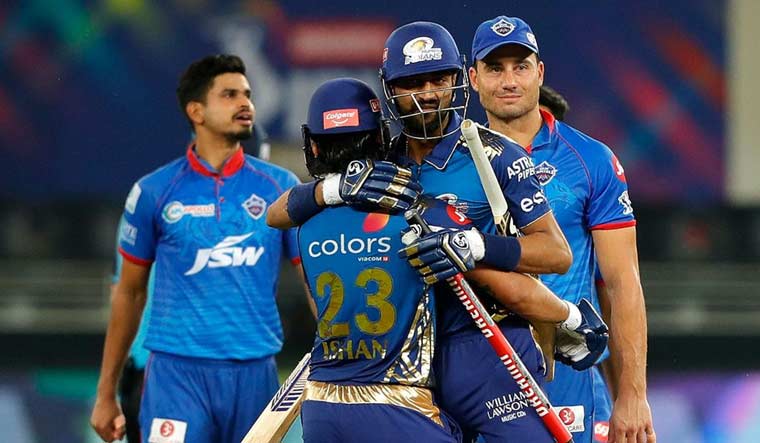 The Mumbai Indians juggernaut continued to roll as they became only the second team in IPL history – after Chennai Super Kings - to defend its title, beating Delhi Capitals by five wickets in the IPL 2020 final in Dubai. It is the fifth IPL tile for the Mumbai side.

Chasing 157 to win, MI cruised to victory with eight balls to spare. Skipper Rohit Sharma played a solid innings of 68 off 51 balls to effectively shut the doors on DC, while Ishan Kishan stayed unbeaten on 33 off 19 balls to take his team home.

For DC, Axar Patel was the pick of the bowlers, giving away just 16 runs in his four overs, though he went wicketless. Their strike bowlers Kagiso Rabada (the purple Cap winner) and Anrich Nortje picked one and two wickets respectively but leaked runs.

Though MI lost Kieron Pollard (9) and Hardik Pandya (3) cheaply toward the end, the match was well within their grasp.

DC were never really in the game, both with the ball and with the bat, except when, for a brief period of time, when skipper Shreyas Iyer and Rishabh Pant put on a 96-run partnership after they were reduced to 22/3. But all hopes of a competitive score were dashed once Pant was dismissed in the 15th over. DC could only manage 38 runs in the next five overs, which proved costly for them in the end.

Mumbai Indians were brilliant with the ball in death as they were upfront in the Powerplay overs. Boult was the pick of the bowlers, taking 3/30, while Nathan Coulter-Nile chipped in with two scalps.