Dean Jones: A life well-lived, on and off the pitch

A professional who never minced his words, Jones always loved what he did 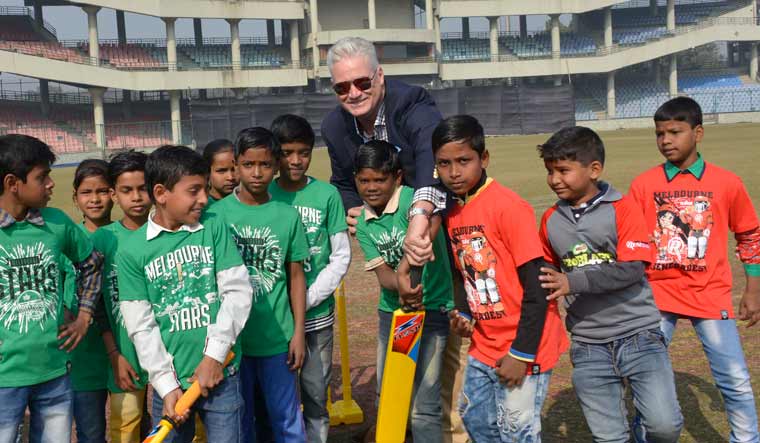 It had to be in India. Dean Mervyn Jones, former cricketer, coach and TV commentator, had a relationship with India right from his playing days. This was where he scored his career-best 210 during the Tied Test match in Chennai in 1986; this is where he thrived the most as a TV commentator—known famously as "Professor Deano" to a generation who have probably only heard or read of the Tied Test. This is where it all came to an end—in his hotel room in Mumbai, post a pre-match debriefing with his colleagues.

Jones, was part of the Allan Border-led team that scaled heights after hitting a nadir; the team that came into being after the Greg Chappell-Denis Lillee era. He was central to Australia's 1987 World Cup victory and the 1989 Ashes win. He was a batsman who loved to score with freedom and break shackles; he was the same with his commentary—a thorough professional who never minced calling a spade a spade. Not for him towing the diplomatic line, with fear of losing his contract—refer to his infamous on-air "terrorist" remark while speaking of South African batsman Hashim Amla in 2006 which saw him being left off the commentary circuit for quite some time.

His record in both Test and One Day cricket is top grade—averaging over 44 in both formats. He was a prolific scorer in first-class cricket 19188 runs in 245 matches and was the record run maker for Victoria till 2008 when Brad Hogg overtook him. Born and brought up in Melbourne he was coached by his father Barney at the Carlton Cricket Club and one of the biggest influences on his cricket was former Australian opening batsman Keith Stackpole. While his father was a hard taskmaster, Stackpole was the hard competitor—Jones's cricket reflected both these qualities right through his career and after it.

It is as a one day cricketer that he would always be known for his performances—dancing down the wicket to take on bowlers, fielding like there would be no tomorrow and being outstanding while running between wickets. He was considered a pioneer up the order for the manner in which he batted, so different from the classical batsmanship he could display in the long format. He scored seven centuries to help Australia become the World Cup winners in the 1987 Reliance Cup played in the subcontinent.

He was a permanent member of the side until 1992—but a waning performance in Test cricket led to him being dropped by selectors in 1992; he would play ODI cricket for two more years and then call it a day, rather unhappily, in 1994. Clearly, Jones felt he had unfinished business left when it came to international cricket.

He took up TV commentary and coaching post-retirement; He was head coach of Pakistan Super League franchise Islamabad United from 2015 to 2019. and fairly successful stints at that—the team won the PSL title in 2016 and 2018. He was also the interim coach of Afghanistan briefly in 2017.

He travelled to all parts to commentate—be it series or leagues—he just loved life behind the mic. Off days in between were spent playing golf.

But, perhaps one of the finest aspects of his post-playing career was the work he did for charity. He did charity walks to raise funds for Bone marrow donor Insitute, he was involved in fundraising for cancer research in the UK, he undertook charity walks to raise awareness and funds for multiple sclerosis as well as for the Make a Wish foundation—to name a few. He was made a Member of the Order of Australia in 2006 for his services to cricket and charity and was inducted into the Australian Cricket Hall of Fame in 2019.

Fun, friendly, with no airs or pretences, Jones played and lived his own way—always with his heart on his sleeves. A voice and a presence that will be deeply missed in the world of cricket.