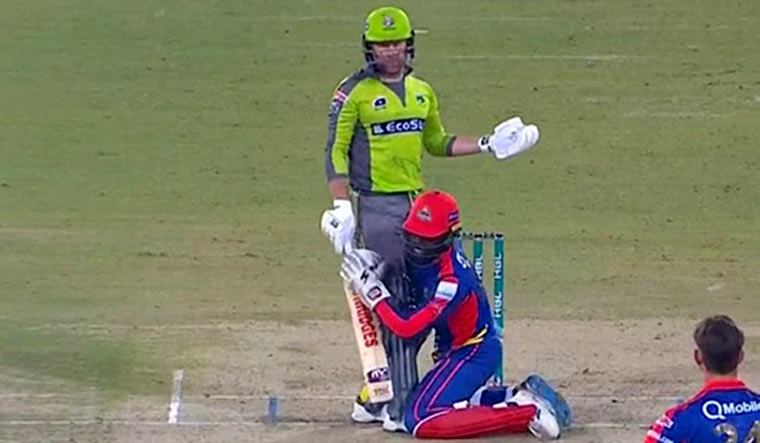 Walton rushed forward to catch the top-edge but lost sight of the ball, and ended up hugging Dunk's legs hilariously | via Twitter

The T20 match between Lahore Qalandars and Karachi Kings in the ongoing season of the Pakistan Super League saw a hilarious moment today, in Lahore.

At the Gaddafi Stadium, Karachi Kings batted first and scored a formidable 187/5. England batsman Alex Hales smashed a 48-ball 80, with five sixes and six boundaries. He was ably supported by wicketkeeper Chadwick Walton, who blasted a 20-ball 45.

But Walton's 'moment' came during Lahore Qalandars's chase. Chasing 188 to win, the Qalandars were going strong, with Australian Ben Dunk leading the way. In the 10th over, Dunk, while attempting a reverse sweep off Kings all-rounder Cameron Delport, top-edged the ball. Walton rushed forward to catch it but lost sight of the ball, and ended up hugging Dunk's legs hilariously.

Dunk went on to smash a brilliant 99* off just 40 balls, with three fours and 12 sixes. He put on an unbeaten match-winning 140-run partnership for the third wicket with skipper Sohail Akhtar (68*).

The Qalandars won with five balls and eight wickets to spare.