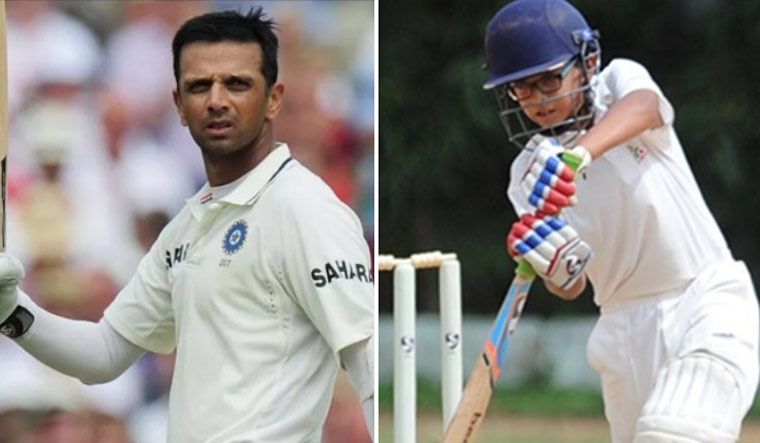 For connoisseurs of Indian Test cricket, few sights can be as gratifying as watching a determined and technically sound Rahul Dravid thwarting all efforts by rival bowlers to breach his defence. He was called 'The Wall' of Team India for a reason.

Now, a 'chip of the old wall' seems to be on his way to follow in his illustrious father's footsteps. Dravid's 14-year-old son Samit has been making waves with some daddy hundreds in age-group cricket.

This week, Samit scored 201 for Vice-President's XI against Dharwad Zone in Karnataka State Cricket Association's Under-14 inter-zonal tournament in Bengaluru. His 256-ball knock was studded with 22 fours.

The bespectacled Samit followed it up with a classy 94* in the second innings. And unlike his father, he contributed with the ball too, taking 3/26, in the drawn match.

Last year, in a KSCA BTR Cup Under-14 tournament match, Samit smashed 150 runs for Mallya Aditi International School, to guide his team to a huge win over Vivekananda School.

Rahul Dravid is currently serving at National Cricket Academy as its Director of Cricket Operations.

Three years ago, Samit scored 125 runs for Bangalore United Cricket Club against Frank Anthony Public School in the Tiger Cup cricket tournament. He had also won the ‘Best Batsman’ award in a U-12 Gopalan Cricket Challenge in September 2015, for scoring three match-winning half-centuries (77*, 93, and 77) for Mallya Aditi International School.

Dravid, who played 164 Tests for India and scored 13,288 runs at an average of 52.31, is currently serving as the head of cricket at National Cricket Academy.