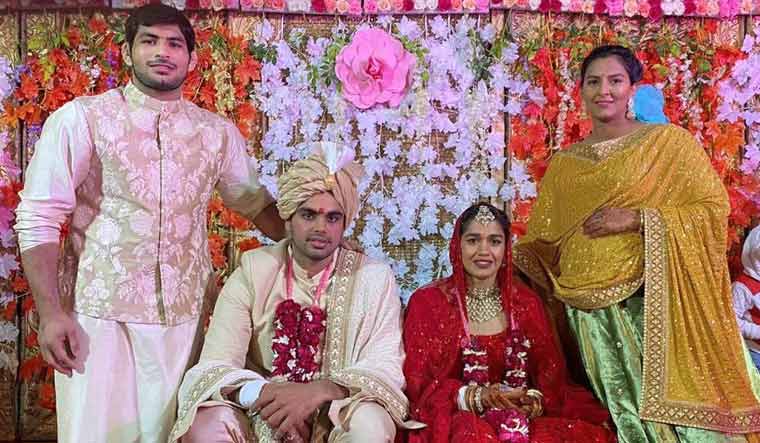 The Phogat sisters are household names now, thanks to Aamir Khan-starrer Dangal, which was based on their lives, along with their father Mahavir Singh Phogat. The film showcased their struggles to break into wrestling, a male-dominated sport in their home state, Haryana.

Their success has been nothing short of a revolution for women's wrestling in India. So, when Babita Phogat decided to tie the knot with wrestler Vivek Suhag, she did it in style.

There was no dowry, but the highlight was that the bride and groom took eight 'pheras' (going around the holy fire) instead of the traditional seven. The extra one was for a pledge to save, teach and let the girl child play.

Babita's sister Geeta took to Twitter to post a picture of the newly-wed couple with her and husband Pawan Kumar.

Vivek and Babita met at an event in Delhi and have, reportedly, been seeing each other since for the past five years.

Both Babita and her father Mahavir had joined the BJP ahead of the Haryana assembly elections this year, but she lost the Dadri seat to independent candidate Somvir Sangwan.

Babita won the gold in the Commonwealth Games in 2014 and silver in the 2018 edition.