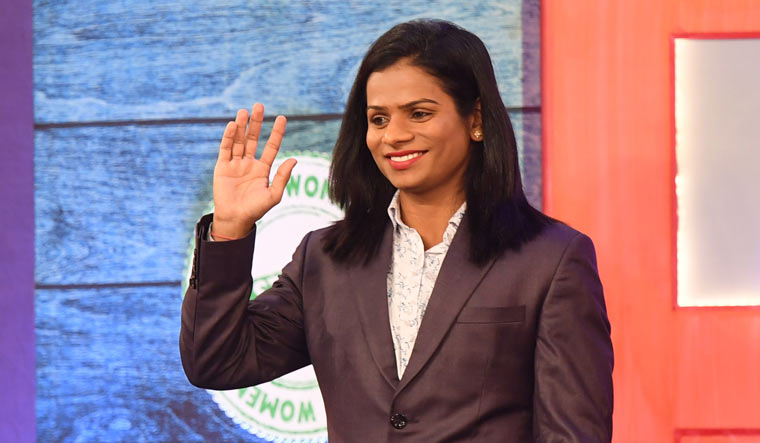 “Heart chooses the life partner. It does not choose a man or woman. The one I chose is a woman,” said India's fastest woman, who became the country's first openly gay athlete after she announced her same-sex relationship.

In conversation with sports journalist Sharda Ugra at 'We The Women' summit held in Bengaluru on October 3, Dutee Chand, 23, shared her journey from a small village in Odisha to a national stage.

At the event curated by journalist Barkha Dutt, Chand shared her dream to set up an academy for sprinters in her state to train youngsters who can win medals for the country.

Hailing from a poor family, Chand took up athletics for a job in 'sports quota'. But soon, her passion for sports took over. "Being poor is a sin. We have to fight our way to make it big. We were nine members in the family. We lived in a small room. My father earned Rs 100 a month. We ate rice gruel. We used to visit local vegetable market to pick vegetables off the streets. But it was my sister who lured me into taking up running," Chand said. "I was a middle-distance runner who was forced to shift to sprinting for want of a coach."

But the burden of poverty, patriarchy, prejudice over her sexual orientation and attempts to discredit her achievements over an obsolete rule, made her a greater champion of rights.

"I have broken my own national record ten times. My mother and sister encouraged me despite taunts from a conservative society. I kept focusing on my career and I am the second athlete after P.T. Usha didi to win medals in sprint.”

In June 2014, she won two gold medals at Asian Junior Athletics Championships in 200m and 4x400m relays. She was hoping to get qualified for the Commonwealth Games but was dropped at the last minute after the Athletics Federation of India said that hyperandrogenism made her ineligible to compete as a female athlete. Chand appealed to the Court of Arbitration for Sport (CAS).

"I thought it was a routine dope test. I did not know about gender test. I read in Odia newspapers about it. They said I was not a girl. I was shocked. Many advised medical remedies. But someone advised me to fight it legally. I appealed. Case went on for two years. I got a decree in my favour," said Chand, who raised her voice against a discriminatory practice that banned women athletes with high testosterone levels.

The toughest battle for Chand has been against the derogatory labels over her sexual orientation.

"First, I told my mother about it. She was not convinced. My sister too turned hostile. In fact, my sister started blackmailing me. The Supreme Court had just decriminalised homosexuality. So, I decided to come out and open up about my same-sex relationship. It was easier for me as I am a celebrity. But for my partner who lives in my hometown, it was hard to face the world," Chand said.

Did it intimidate her? "Jo darr gaya, woh mar gaya na? (One who gets scared is as good as dead, isn't it?"

Amid all the fame and criticism, how did she see herself?

"I am a human, who was born in this country. Dutee Chand is a brand today. I want to set up a training academy and win more medals for the country. Nobody is on the planet to live forever. So, give your everything. Youngsters should choose a career and life partner of their choice. And think of doing something for the country too," Chand said.