The winners hailed from all walks of life, from the military to academia to insurance 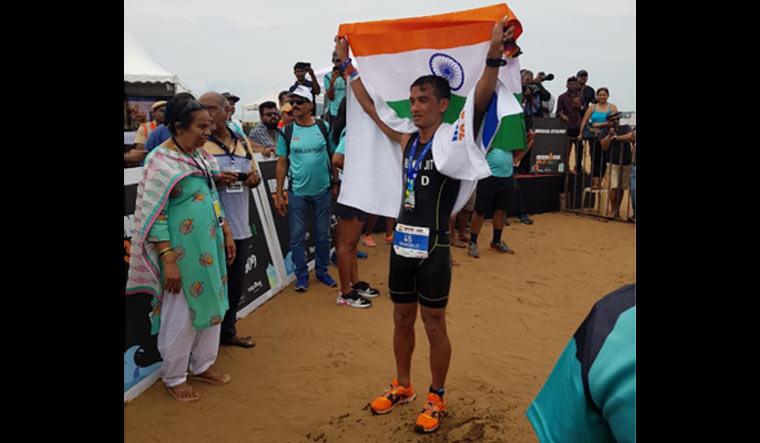 A 1.9 km swim, 90 km of cycling and then a 21 km run—This is what the over 1,000 participants at the Ironman 70.3 triathlon had to pull off to complete one of the world’s toughest one-day sporting events, which took place at the Miramar beach in Panjim, Goa, on Sunday.

It was a proud moment for India, however, as the first, second and third finisher titles all went to Indian athletes.

Bishworjit Saikhom from Manipur completed the race to come first. Speaking to THE WEEK, he said that this was his first Ironman triathlon. “I have participated in a couple of triathlons before but not as challenging as Ironman triathlon. I struggled a lot to get here and I kept telling myself that I came here to win. People from outside come to India, win medals and go back. I wanted to win this race for my country, for my people,” says Bishworjit.

He trains with the Bombay Sappers—a regiment of the Corps of Engineers of the Indian Army. “I lost my father last year and it was his desire that I win an international athletic event. I will now be preparing for the full Ironman after the 2020 World Championship in Kona,” he says.

After a small delay of half an hour, the Ironman 70.3 triathlon started at 7:30 am at the Miramar beach. Although the rain had played spoil sport two days prior to the event—and the authorities had put a ban on entering the sea—the weather calmed just hours before the event.

The humidity in Goa was definitely a challenge for most international participants, especially in the final part of the race—the run. But, that did not stop participants from finishing the race.

"I was not worried about the weather. I have seen a lot of Ironman events and the weather does not really stop participants from completing the challenge,” says Deepak Raj, founder of Yoska and the organiser of the Ironman 70.3 Goa.

With over 1,000 participants, 700 from India and the rest from abroad, the biggest challenge that organisers faced was for the initial swim, as many participants got kicked and pushed by fellow racers. According to six-time Ironman champion Natascha Badmann from Switzerland, the swim course in Goa was one of the top five difficult courses in her career.

“I have been racing for over thirty years now, but this one was so hard; there was such strong current. On the way out, I was constantly being rammed into the buoys. I am a strong swimmer, but there were so many first-timers out there and it must have super difficult for them,” she says.

Natascha was the first woman to finish the triathlon in Goa.

In the relay category, father-son duo—Yashish Dahiya, CEO of Policy bazaar, and 18-year-old Adit Dahiya—and their coach Pankkaj Dhiman, finished first. “Adit flew down from London for this event. I was a little scared for him as he is not used to open water swimming but he did just fine. When he came out of the water, I felt relieved and I went onto finish the second lap of the race—cycling,” says Yashish.

According to coach Pankkaj, Yashish trained for the event in between his busy schedule at work and they are confident that they can complete the triathlon in the individual category as well.

The event came to a wrap with the roll down and awards ceremony. “This will definitely ignite a spirit of fitness among Indian and I am sure many more Indians would take part in the event the next year,” says Deepak.

First in the relay category: The Juggernauts—Yashish Dahiya, Adit Dahiya and Pankkaj Dhiman