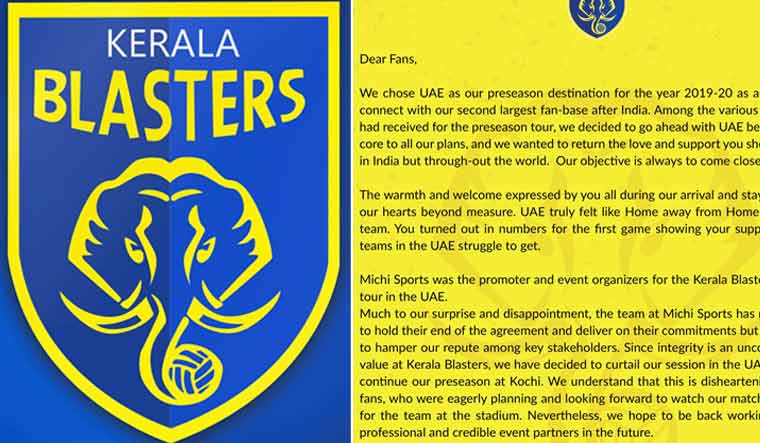 Kerala Blasters suffered an early blow to their pre-season preparations. The team which was in the UAE for their pre-season matches have now decided to return after having played only one match post a disagreement with the sponsors. The team was set to play a total of four matches, with one scheduled for this evening. The team will now look to play their preparatory matches in Kochi. Blasters will play their first ISL match of the season against ATK.

In a post on Twitter, Kerala Blasters wrote that they chose the UAE as a pre-season destination owing to the huge Malayali fan base. They also blamed sponsors Michi Sports for not holding up their end of the agreement.

“Michi Sports was the promoter and event organizers for the Kerala Blasters Preseason tour in the UAE. Much to our surprise and disappointment, the team at Michi Sports has not just failed to hold their end of the agreement and deliver on their commitments but has also tried to hamper our repute among key stakeholders. Since integrity is an uncompromisable value at Kerala Blasters, we have decided to curtail our session in the UAE and further continue our preseason at Kochi.” they wrote.