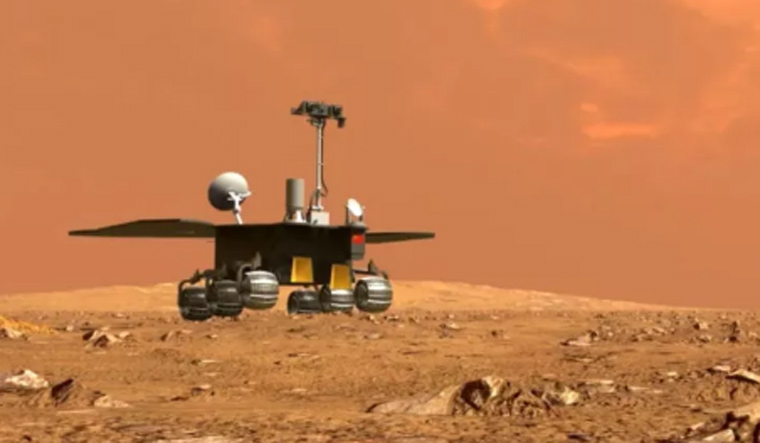 Chinese researchers have detected water-bearing minerals on Mars by analysing data collected by the Zhurong rover that is currently operating on the surface on the Red Planet, reports Global Times.

The research team from the Chinese Academy of Sciences' State Key Laboratory of Space Weather and the academy's Center for Excellence in Comparative Planetology led by fellow researcher Liu Yang, concluded that water could be found more than what was previously thought. The study suggests that large amounts of  water could be stored in the form of minerals at landing site, and that could be used for future human exploration of the Red Planet.

The analysis of data on sediments and minerals of the craft's site has been published in the journal Science.

This is the first time that water-bearing minerals on Mars have been detected by the short-wave infrared spectrometer on a Mars rover.

Zhurong rover landed in a large plain in Mars' northern hemisphere called Utopia Planitia on May 15, 2021.  Equipped with six scientific payloads, the main objectives of the Zhurong rover are to investigate the morphology, mineralogy, space environment, subsurface structure, and water/ice distribution of the southern Utopia Planitia.

So far, Zhurong has trekked nearly 2,000 meters on the Mars surface. When the energy levels fall below a certain point, Zurong switches to a sleep mode while maintaining minimum functions. Hibernation will continue till the conditions improve.

China is aiming to bring samples it has collected from Mars by 2030. The Mars sample retrieving mission can be successful only if a launch vehicle with greater thrust is developed.