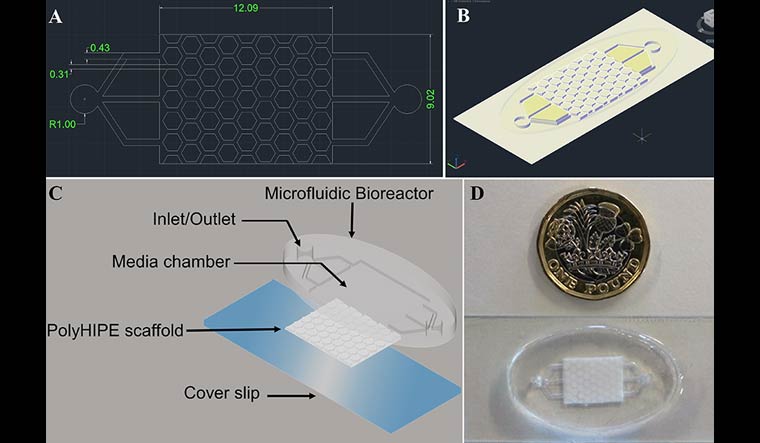 Engineers from the University of Sheffield engineers have developed a technology which they say could change the way we test new medical treatments to repair human organs and bone tissue.

With a new technology using mini-scaffolding to grow human tissue in a lab, using a new bone-on-a-chip system, the engineers hope to reduce the reliance on animal testing in research, by utilising bone tissue grown entirely in vitro.

The study, led by researchers from the University’s Department of Materials Science and Engineering and the Insigneo Institute for in silico Medicine, along with collaborators from Universitat Ramon Llull, Spain, developed a bone-on-a-chip device containing mini scaffolding that can be used to grow human bone tissue in the laboratory.

In a new paper published in Frontiers in Bioengineering and Biotechnology, the researchers demonstrate how the bone-on-a-chip - a tiny chip containing living cells - can be used to grow bone tissue which can then be used to test new potential treatments for diseased or damaged bones.

Testing new medicines usually requires extensive in vivo testing involving animal models. However, the new approach developed by the University of Sheffield-led team has been developed in vitro—entirely in the laboratory—and reduces the need to use animals in research.

The field of organ-on-a-chip aims to create small devices that contain miniature versions of organs such as bone, liver or lungs in the laboratory. By testing new medicines on small versions of human organs rather than in animal models, the hope is that there will be a higher success rate of finding ones that work in humans.

The aim is that one day, the device developed by the Sheffield team could be connected to other organ-on-a-chip devices - such as the liver, heart, lungs, etc - to create a human-on-a-chip that would remove the need for animal research in the development of new medical treatments entirely.

In vitro testing of new treatments is normally done on cells grown on flat, two-dimensional surfaces. However, the team of researchers has created three-dimensional scaffold structures within their bone-on-a-chip that better resembles real bone.

The three-dimensional structures are developed using a material known as a polymerised high internal phase emulsion (polyHIPE) using a technique called emulsion templating. An emulsion is a mixture of oil and water which doesn’t separate—like mayonnaise or milk. A polyHIPE is made using an oil that solidifies under ultraviolet light to create a plastic material which contains millions of tiny interconnected holes where the water used to be. These highly porous materials form a scaffold that helps cells create new bone tissue in 3D.

Having produced the three dimensional scaffolds, the team inserted them into a mini bioreactor to create the bone-on-a-chip device and used in vitro techniques to assess its potential to reproducibly grow human bone tissue from stem cells.

In the new paper, the researchers present findings demonstrating that organ-on-a-chip technologies have the potential to revolutionise pharmaceutical pre-clinical testing by increasing throughput whilst minimising financial and ethical concerns associated with animal research.

Dr Frederik Claeyssens, Reader in Biomaterials from the University of Sheffield’s Department of Materials Science and Engineering, says, “The introduction of microfluidic channels in a porous material allows us to mimic the natural 3D environment of cells better than in standard microfluidics.”

“This is, in my view, a great enabling technology to build complex 3D tissues - or organs-on-a-chip - as testing platforms for pharmaceutical testing.

“These platforms have the potential to reduce the time and effort required for, and also reduce the use of animal models for preclinical drug testing.”