Everything you need to know about the ambitious neurotech moonshot 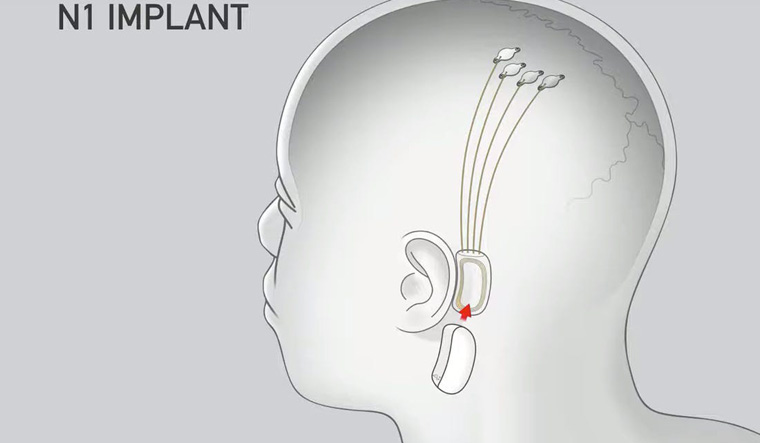 Representational image of how Neuralink works

On Friday, after a briefly delayed livestream, Tesla CEO Elon Musk debuted the much-vaunted live demo of Neuralink, the ambitious neurotech moonshot which involves building a wireless brain implant capable of reading from and writing to the brain. Or in Musk’s words, something akin to having a “Fitbit in your skull, with tiny wires”.

The Neuralink, currently in v0.9, promises to someday—and the key word here is someday—allows humans to gain greater access to and control of their brains. The implications, more immediately, would be for those with brain and spinal cord injuries, for whom Neuralink could help them easily interface with prosthetics, computers and even smartphones. For now, the “primary purpose” of Neuralink’s demo was recruitment: Musk wanted to use the event to attract engineers (you can apply here) from across disciplines to join Neuralink and help build the future of human consciousness.

In the unspecified future, Neuralink would allow a user to summon their Tesla with a thought, store or insert a memory from a digital file, play videogames like Crysis or Starcraft in their heads—or even ‘cure’ mental health conditions like anxiety or depression. All of these were examples Musk gave for the device, a demo of which he called the 'Three Little Pigs Demo'.

Before getting to the demo, one needs to understand what Neuralink actually is, and the challenges behind the project.

To put it simply, it is a brain-machine interface, visualised by Musk, that uses implant chips and thousands of electrodes in the most complex organ to connect humans and computers. In its primary stages, it can assist paraplegics and other patients of Alzheimer's, dementia, and neurologically disabled people to control artificial limbs and other connected devices with thoughts. As the technology evolves further, Musk expects perfect human-computer symbiosis, or linking our conscience to an intelligent system.

The rise of Artificial Intelligence (AI), and unnerving prophecies of a world taken over by machines, has been a pet peeve of Musk, and Neuralink is a system which could, sometime in the far future, help in that symbiosis. As Musk tweeted: "If you can't beat them, join them." However, as the human technology limitations currently stand, there is still a long way to go before anything remotely close to that is achieved.

In a white paper, Musk wrote: “We have built arrays of small and flexible electrode threads, with as many as 3,072 electrodes per array, distributed across 96 threads. We have also built a neurosurgical robot capable of inserting six threads [192 electrodes] per minute. Each thread can be individually inserted into the brain with a micron precision for avoidance of surface vasculature and targeting specific brain regions.”

In other words, a very small microchip will be wired into the brain behind a person's ear, and it will in turn connect to very fine and flexible threads—thinner than a human hair—connected to electrodes in the brain. The implants will help in the ultra-amplification of the very faint brain waves, and its further digitisation. A single USB-C cable provides full-bandwidth data streaming from the device, recording from all channels simultaneously. One electrode records the electrical signals between neurons, which instructs the brain. Now consider 1,500 electrodes. This could help map all different parts of the brain and bring a new understanding on decoding the complex brain signals.

Perhaps the most interesting of all in the setup is the “sewing machine”—a robotic surgical device which will implant the threads into the human brain, which is a highly daunting task given the intricacies of the delicate human brain. The brain is a very soft mass of tissues, fragile, and very mobile—moving to the rhythm of your breaths and heartbeats. The tiny wire-like electrodes, which will interface with the brain’s complex electrical signals, would be carefully inserted—so precisely that they dodge veins and do not trigger bleeding.

The white paper claims that the mechanical sewing machine is capable of implanting six threads or 192 electrodes per minute. Neuralink, according to latest reports, also has a system capable of reading information from 1,500 implanted electrodes in rats, which is 15 times more efficient than what we currently use on humans.

What are the challenges?

Unless anybody missed the memo, the process involves direct brain surgery. Getting the necessary approvals from the US Food and Drug Administration (FDA) for drilling holes in brains will be a weighty task, and certainly difficult to square off with Musk's lofty deadline of a 2021 launch. Musk expects a LASIK-model laser surgery to replace the invasive procedures, but they are all a long way off.

Trials were conducted on monkeys, and Musk had announced last year that he had gotten a monkey to "control a computer with its brain". However, a human brain, with its all its complexities, is a whole different ballgame. Experts have argued that each human brain is uniquely different from the next, and it would require the machines to adapt to the eccentricities in each brain.

Additionally, carrying the information out of the brain is a challenging issue. Given the faintness of the brain waves, even a tiny bit of noise can affect the entire system. Currently, the system uses USB-C wired connection, even though wireless methods are under development.

The use of flexible nanothreads is an encouraging development. Larger electrodes could damage the brain, or degrade over time, causing possible scar tissue development. However, there is still the issue of the durability of the nanowires; it cannot be frequently placed and replaced as it can damage the organ. It has to last a long time. There is also the issue of heat generated via the data transfer inside the brain, which will exponentially increase with the number of electrodes.

In a room packed with a carefully curated list of bloggers to document the event, three pens served as the focal point, with black curtains hiding their exhibits—a trio of pigs that were guinea pigs (pun unintended).

One pig, Joyce, with no implant, was shown, to demonstrate what a cute little pig looks like. The next, Dorothy, had had the implant for a while before it was removed, and was exhibited to show that the procedure for both insertion and removal was safe—or rather, survivable. The third pig, Gerturde, came out only after a lengthy struggle, and some reluctance. Gertrude had been living with the coin-sized (23mm by 8mm) Neuralink implant in her head for about two months. Musk described the surgery needed to insert this device as something that could someday take around an hour to perform by an advanced robotic surgeon, and which the patient could undergo and return from hospital in the same day. A small incision would be made in the skull, allowing the implant to be placed on the brain’s cortical surface (outer surface), and the wound then sealed with superglue. 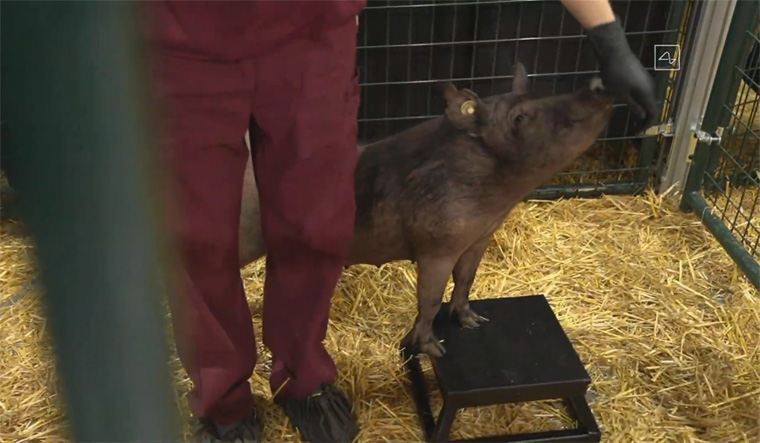 Gertrude’s brain activity was played before the audience in real-time, emitted as a series of beeps. As the pig shuffled around and sniffed things with her snout, neural spikes were detected and recorded on the screen. Impressively, a pre-recorded video played for the audience showed that signals recorded by Neuralnk could be fed to a computer, that could then ‘predict’ Gertrude’s limb movements with high accuracy. This degree of understanding between a computer and the brain could prove instrumental in allowing an eventual ‘merge’ between human consciousness and an AI.

Asides from this, the rest of the event focused on the possibilities of Neuralink. How far away these are remains the big question—and will depend in great part on how much Musk can scale up Neuralink.

When asked how many employees the company could have, Musk spoke of exponential growth, possibly necessitating over 10,000 employees. “A couple more orders of magnitude of hiring...the number of electrodes will grow with the number of people at the company,” Musk said.

For now, the device supports 1,024 channels per link, measures 23mm by 8mm, sits “flush with the skull” (ie is invisible, as oppose to earlier devices that are prominent), has sensors that measure inertia, angle and orientation much like those in a smartphone, as well as pressure and temperature sensors, an all-day battery life (with induction charging), and “megabit” wireless data rate.

Any similar projects underway in the world?

Neural interface is now a topic of great interest for corporations across the world. Facebook recently acquisitioned a startup Ctrl-lab for around a billion dollars, and the US government has DARPA for the same aims. Startups such as Kernel, Paradromics and NeuroPace also are trying to exploit advancements in material, wireless and signaling technology to create similar devices to Neuralink.

There are a lot of fast development happening in the field. As Gizmodo reported, last year, a team of neuroscientists from Columbia University translated brain waves into recognisable speech, while a team from the University of California San Francisco built a virtual vocal tract capable of simulating the mechanical aspects of verbal communication by tapping directly into the human brain. In 2016, a brain implant allowed an amputee to use their thoughts to move the individual fingers of a prosthetic hand.

Publication ZdNet has quoted experts to note that this could result in possible brain hacking incidences if there are no adequate protection measures in place. As per the report, Dr. Sasitharan Balasubramaniam, director of research at the Waterford Institute of Technology's Telecommunication Software and Systems Group (TSSG), said the concerning part is the idea of what type of damage a digital attack can cause in the human brain: "Will it erase your skills or disrupt your skills?"

"Would they [the hacks] come in the form of just new information put into the brain, or would it even go down to the level of damaging neurons that then leads to a rewiring process within the brain," resulting in a disruption in the thinking process, said Dr Balasubramaniam adding that "It's not only at the information level, it could also be the physical damage as well."