ISRO calendar to be delayed due to COVID-19: Chairman K. Sivan

ISRO had a busy launch calendar this year, including first flight of Gaganyaan 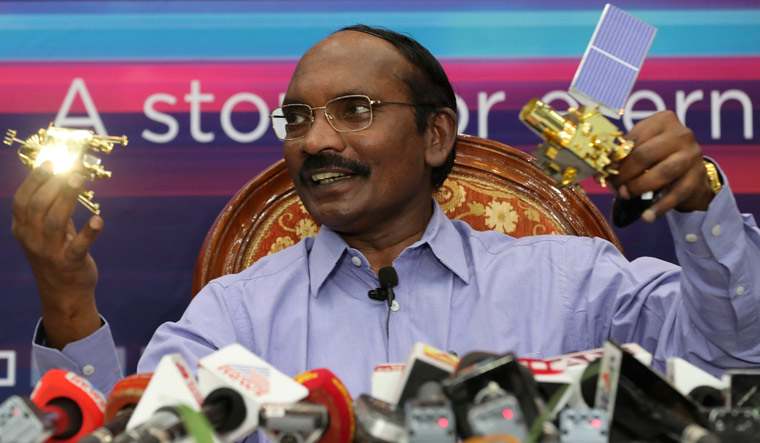 A lot of our manufacturing is done by public and private sector enterprises, and work was suspended there, too, said ISRO Chairman K. Sivan | File

The Indian Space Research Organisation's (ISRO) launch calendar will get impacted because of the Covid-19 pandemic, despite every effort to keep missions on schedule, chairman K. Sivan has said.

The national lockdown, imposed on March 25 in a bid to contain the pandemic, meant that everyone was working from home. This included ISRO. However, a lot of work was suspended, simply because it cannot be done from home. This includes trials, testing equipment, manufacturing hardware and components. "A lot of our manufacturing is done by public and private sector enterprises, and work was suspended there, too," Sivan said. He, however, did not specify the missions that would get delayed and by how long. "Our endeavour continues to be to stick to our deadlines," he said. It is only during Lockdown 4 that manufacturing has begun again, but the scenario is still not as it was before, with so many restrictions on movement.

ISRO had a busy launch calendar this year, including several prestigious and important launches. The biggest of these is the first flight of Gaganyaan, India's human space flight mission. Gaganyaan comprises three flights, of which the first two are to be unmanned, and the last, scheduled for 2022—the 75th year of the country's independence—a manned one. Earlier this year, Sivan had announced the first Gaganyaan flight would take off this December. But given the current delay, will ISRO meet the schedule?

Meanwhile, the four Indian Air Force Test pilots, who were sent to Russia, have resumed their astronaut training. The officers had left in February, but within a few weeks, even Russia went under lockdown, and the training was suspended. The training resumed only on May 12. ISRO, meanwhile, declared an Announcement of Opportunity (AO) for national research and academic institutions to participate in the Human Space Programme. Through an announcement on April 17, it invited proposals for "developing affordable and indigenous cutting edge technologies for human survival in low earth orbits and beyond for space exploration." The proposals are invited for a number of technological development areas like space food, green propulsion, space bioengineering, debris management and harnessing and storing energy.

Two technology demonstration flights of the indigenously developed Small Space Launch Vehicle (SSLV) later this year are also important. The SSLV are even more cost effective than PSLVs for launching small satellites. With India having gained an expertise in small satellite launches, which it has been doing commercially for foreign clients, too, developing the SSLV is important for its stability.

In addition are routine launches of communication, earth observation and geo-imaging satellites, atop a variety of vehicles—PSLV, GSLV II and GSLV III.

Two big missions were scheduled for the beginning of next year—the probe to the sun's corona, Aditya, and the third moon mission, Chandrayaan 3.

ISRO has not had a launch from Sriharikota this year at all. It launched an important communication satellite, the GSAT-30 on January 17 from French Guiana. Another important launch, that of the geo-imaging satellite, or GISAT 1, India's first earth imaging satellite from a geostationary orbit, was scheduled for March 5, but was postponed shortly before launch. ISRO has been tightlipped about the postponement, citing just "technical reasons", but there has been a buzz that the US was not happy with this launch, since components of its sensors were sourced from foreign countries and were against America's strategic interests. The GISAT has powerful cameras that can track the movement of humans across the country's borders and can be a good surveillance asset, in addition to its use in monitoring natural disasters like fog movement, forest fires, and melting glaciers.