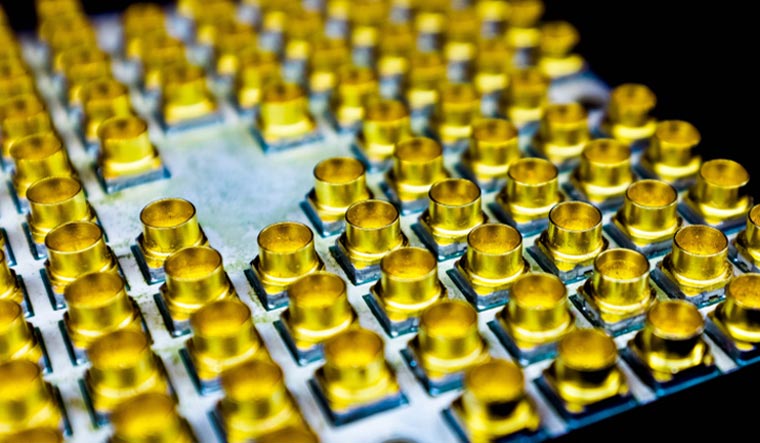 For the first time, researchers have measured the accuracy of two-qubit logic operations in silicon, an advance that may help develop full-scale quantum processor.

In 2015, researchers at the University of New South Wales (UNSW) in Australia were the first to build a quantum logic gate in silicon, making calculations between two qubits of information possible.

The advance cleared a crucial hurdle to making silicon quantum computers a reality, according to the study published in the journal Nature.

"Fidelity (accuracy) is a critical parameter which determines how viable a qubit technology is—you can only tap into the tremendous power of quantum computing if the qubit operations are near perfect, with only tiny errors allowed," said Professor Andrew Dzurak from UNSW.

The team used a technique that can assess qubit accuracy across all technology platforms—demonstrating an average two-qubit gate fidelity, or accuracy, of 98 per cent.

Quantum computers will have a wide range of important applications in the future thanks to their ability to perform far more complex calculations at much greater speeds, including solving problems that are simply beyond the ability of today's computers.

"But for most of those important applications, millions of qubits will be needed, and you're going to have to correct quantum errors, even when they're small," Dzurak said.

"For error correction to be possible, the qubits themselves have to be very accurate in the first place—so it is crucial to assess their fidelity," he said.

"The more accurate your qubits, the fewer you need—and therefore, the sooner we can ramp up the engineering and manufacturing to realise a full-scale quantum computer," said

The researchers said the study is further proof that silicon as a technology platform is ideal for scaling up to the large numbers of qubits needed for universal quantum computing.

Given that silicon has been at the heart of the global computer industry for almost 60 years, its properties are already well understood and existing silicon chip production facilities can readily adapt to the technology.