Anomalies continue to plague NRC, second list to be out in Feb 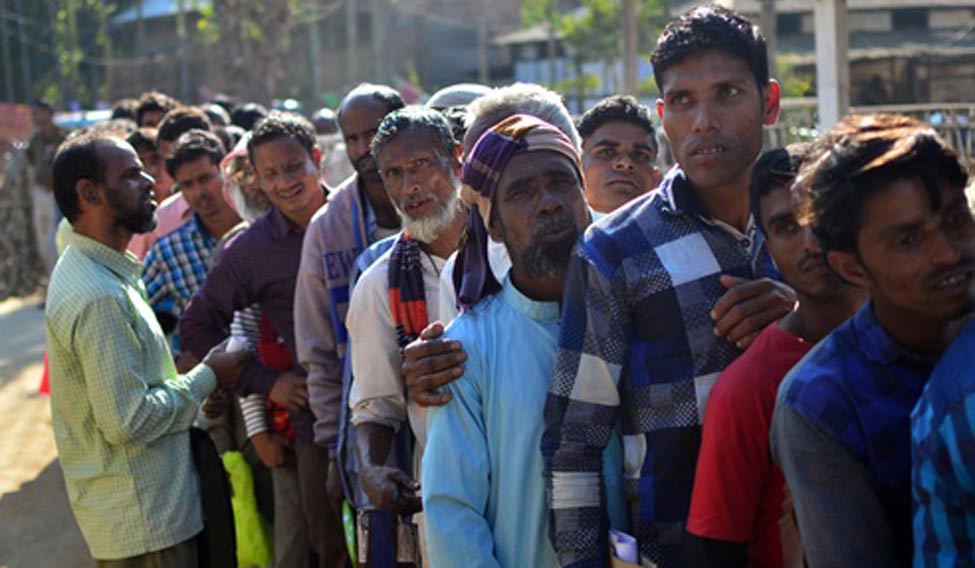 (File) In lower Assam and the Bengali-dominated Barak Valley, many people in the age group of 30 to 45 years have submitted birth certificates that were issued in 2014 and 2015

The second draft of the National Register of Citizens (NRC) is likely to be published in February 2018, the date for which has not yet been finalised. When the first draft of the NRC came out in the midnight of December 31, 2017, the names of 1.90 crore people were included out of a total 3.29 applicants, leaving out 1.39 crore.

According to top sources in the NRC office, less than 40 to 45 per cent of the remaining 1.39 crore will be included in the second draft NRC. The reasons being cited are botched up documents which have been submitted by the applicants.

In Muslim dominated districts like Dhubri, South Salmara, Nagaon, Morigaon and Hojai located in lower Assam, close to the Bangladesh border, more than 300 cases have been registered against people who have allegedly submitted fake documents. Some arrests have also been made. To stop such malpractices, the NRC authorities have deputed 15 IAS officers to ensure that no illegal migrant is included in the NRC.

Although the BJP government in Assam under the sports-loving chief minister Sarbananda Sonowal, has so far avoided the outbreak of any major crisis in the state, the central intelligence agencies are not letting their guard down. Time and again, they have warned the government of various organisations who are out to ferment trouble in the state and derail the NRC update process. Eight such organisations have been identified across Assam. Foremost among them is the Krishak Mukti Sangram Samity (KMSS), whose firebrand leader Akhil Gogoi, in and out of jail, has announced a massive protest programme in Assam to oppose the move of the BJP government at the centre to saffronise the state through the Citizenship (Amendment) Bill 2016.

“If the Citizenship (Amendment) Bill is passed, it will render the entire NRC exercise meaningless,” said Akhil Gogoi. Indeed, two crore Hindu Bangladeshis will immediately become Indian citizens, something that the Assamese people will not tolerate, Gogoi said. Moreover, it goes against the spirit of the Assam Accord, signed in 1985, which put an end to a violent anti-foreigner movement in the state.

Former Assam chief minister Prafulla Kumar Mahanta said the bill, if passed, would be disastrous, as it would violate the secular fabric of the Constitution as it seeks to offer citizenship to non-Muslim migrants only. Mahanta, who was a signatory to the Assam Accord, as the then president of the powerful All Assam Students’ Union (AASU) said all foreigners who came to the state after the midnight of March 24, 1971 should be detected and deported.

As the NRC and the Citizenship (Amendment) Bill 2016, is interlinked, sparks are already flying. “The NRC is being updated in Assam with March 24, 1971 as the cut-off date. If the Citizenship Bill is passed, 2 crore Hindu Bangladeshis will immediately become Indian citizens which is unacceptable to us," said Nikita Baruah, a lawyer. The draft bill seeks to grant Indian citizenship to persecuted minorities (read Hindus) who came to the country till December 31, 2014.

Protests have started in Assam to thwart the move of the Centre to overwhelm the state with illegal Hindu migrants, putting the identity of the indigenous people at risk. In Assam, people do not think about illegal migrants along religious lines. All they know is that 885 young indigenous youths have laid down their lives and scores became disabled during the Assam agitation.

Your form could not be submitted.
This browser settings will not support to add bookmarks programmatically. Please press Ctrl+D or change settings to bookmark this page.
Topics : #Assam