45.34 lakh in 30 districts had been affected by the deluge 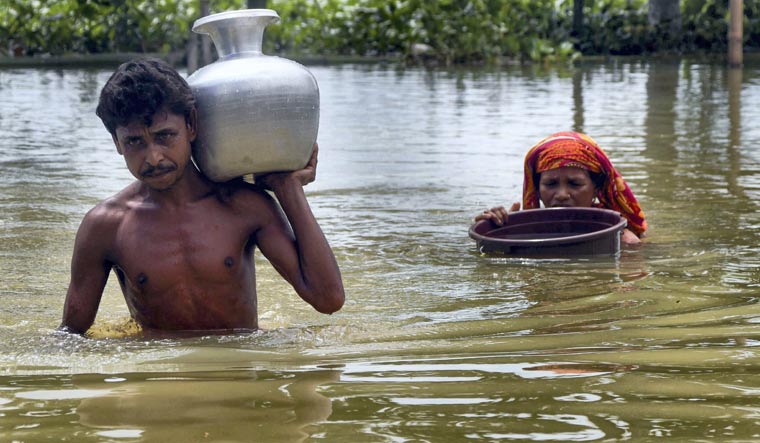 Villagers carry potable water in containers as they wade through a flooded area at Nilambazar village, in Karimganj district of Assam | PTI

On Thursday, a population of 45.34 lakh in 30 districts had been affected by the deluge, according to the bulletin of the Assam State Management Disaster Authority (ASDMA).

The rivers are showing a receding trend though the Brahmaputra at Dhubri and the Kopili in Nagaon are still flowing above the danger mark.

After the death of 10 more people - two each from Barpeta, Dhubri, Karimganj and Udalguri districts and one death each from Cachar and Morigaon, the toll due to floods and landslides reached 118 since mid-May.

The state government announced that it has engaged additional resources to the severely affected districts, especially Cachar and the two other districts in Barak Valley.

Two drones have been deployed in Silchar for carrying out the flood inundation mapping as well as to provide relief materials to the affected people.

Eight NDRF teams from Itanagar and Bhubaneswar along with a team of the Army from Dimapur in Nagaland have been deployed in Silchar.

In addition, 10 personnel of the CRPF and four of the SDRF with boats have been airlifted to Cachar to rescue the stranded people, an ASDMA official said.

After making an aerial survey of Silchar town on Thursday, Chief Minister Himanta Biswa Sarma announced that additional columns of the Army will be sent to Silchar to evacuate marooned people.

The state government has airlifted 85.2 metric tonnes of relief materials from Jorhat and Guwahati to Silchar.

A population of nearly three lakh has been facing an acute shortage of food, clean drinking water and medicines as almost the entire town has been submerged in flood waters.

Packets with food, drinking water bottles and other essential items are being airdropped in the town by Indian Air Force helicopters and this will continue till the situation improves, an official said.

The three districts of Barak Valley - Cachar, Hailakandi and Karimganj - were severely affected by the rising water of the Barak and the Kushiara.

Urban flooding was reported in Cachar, Karimganj and Morigaon districts.

The floods, caused by incessant rainfall, have affected 93 revenue circles and 3510 villages, while 2,65,788 people have taken shelter in 717 relief camps, it said.

The floods have also damaged 168 roads and 15 bridges while three embankments were breached in Nagaon district.

Large-scale erosion was also reported from a number of districts.