Indian or not? Muslims in Assam fret amid drive against illegal immigrants 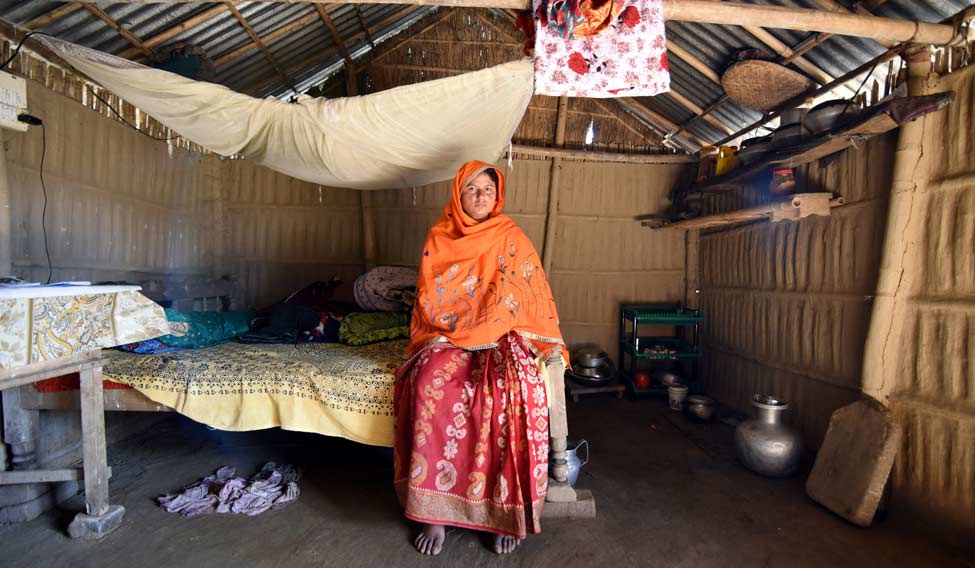 Marzina Bibi, 26, who said she was detained last year on suspicion of being an illegal immigrant from Bangladesh, poses inside her house in Fofonga village in Goalpara district in the northeastern state of Assam | Reuters

Marzina Bibi, a Muslim woman living in Assam, is petrified she will be declared stateless.

The 26-year-old’s name was not on a preliminary list of citizens that was published at midnight on Sunday, although she holds a voter identity card and had voted in state elections in 2016.

“Why are they doing this to me?” Bibi asked, sitting beside a bamboo mat she was weaving outside her mud house in Assam’s Fofonga village. “They think I am a Bangladeshi. I was born here, my parents were born here, I am an Indian.”

The NDA government, which came to power in Assam in April, had vowed during the 2016 election campaign to act against illegal Muslim immigrants from neighbouring Bangladesh. But rights activists say the drive is also targeting Muslims who are Indian citizens.

Two national spokesmen for the BJP declined to comment.

A spokesman for the Ministry of Home Affairs in New Delhi did not reply to e-mails and a telephone call seeking comment.

Citizenship and illegal migration are volatile issues in tea-growing and oil-rich Assam, home to more than 32 million people, about a third of whom are Muslims. Hundreds of people were killed in the 1980s in a violent protest by a native Assamese group against outsiders from the state taking the bulk of jobs and cornering resources, including land.

For the latest update of the National Register of Citizens (NRC), all residents of Assam had to produce documents proving that they or their families lived in the country before March 24, 1971, to be recognised as Indian citizens.

According to the preliminary list of the NRC, about 19 million people in Assam have now been verified as Indian citizens. More names will be added, and officials say the final list is likely to be published in July.

Nearly two dozen Muslims, including Bibi, from paddy-growing villages around Fofonga were spoken to for this report. The people said their names were not on the preliminary list.

“I feel we are targeted because we are Muslims,” said Bibi, who said she has already proved she was Indian—she was jailed for eight months on charges of being an illegal migrant from Bangladesh and was let off only after showing documents attesting to her nationality.

Surrounded by her neighbours in the village, she showed her voter identity card and the court order for her release from jail.

The BJP has said previous governments have included many Bangladeshi immigrants on electoral rolls to buy votes.

At the local NRC office in the Muslim-majority area, only around 4,500 people had made it to the preliminary list out of nearly 11,000 who had applied.

The government officer in charge of the centre, Gautam Sharmah, said there was no religious bias against Muslims.

“That’s impossible. We only look at documents,” Sharmah said at his office, as people trickled in to look for their names on the second day of the list’s publication. “The time taken in the verification process depends on what kind of documents people submit.”

The reporter saw a tribal Hindu man leaving the NRC office with a smile after being told that the names of all six members of his family were on the list. Soon after, two Muslim women came with their infants, and left disappointed.

Hundreds of thousands of people fled to India from Muslim-majority Bangladesh after it declared independence from Pakistan on March 26, 1971, setting off a nine-month civil war. Most of them settled in Assam and the neighbouring state of West Bengal, where there are similar demands to send back illegal Muslim immigrants.

The migrants include many Hindus, but the federal BJP government has said they will not be deported.

Himanta Biswa Sarma, Assam’s finance minister who is also in charge of the citizenship register, said all those whose names do not figure in the final NRC list would be segregated.

“Deportation is an issue handled by the central government,” Sarma said.

“Hindu Bangladeshis who had faced persecution should be given shelter in India and that is the central government’s stand.”

Muslim leaders have called the NRC a tool to make them stateless, likening themselves to Myanmar’s persecuted Rohingya minority. They have also warned of unrest.

Assam Chief Minister Sarbananda Sonowal had told earlier said that the “people who are declared foreigners will be barred from all constitutional rights, including fundamental and electoral. They will have only one right—human rights as guaranteed by the UN that include food, shelter and clothing”.

In Fofonga, Bibi said she would challenge the list if it did not include her and her family as citizens.

“We are poor people, my husband is a labourer,” she said, going back to weaving her mat. “But I will go to court if we are left out.”

Your form could not be submitted.
This browser settings will not support to add bookmarks programmatically. Please press Ctrl+D or change settings to bookmark this page.
Topics : #Assam | #Assam election | #Illegal immigrants India