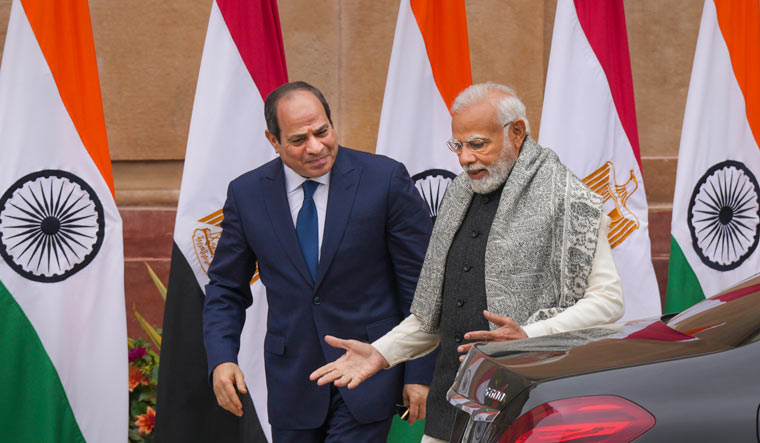 It is the ties of civilisations that bind close. Egyptian President Abdel Fattah el-Sisi began his morning by paying respect to M.K. Gandhi, a man who looms large on the Egyptian freedom struggle, at Raj Ghat.

“India has invited Egypt as a special guest for the G-20 summit which shows our age-old relationship. We have decided that under the India-Egypt strategic partnership, we will create a long-term structure of cooperation on political, security, economic, and scientific areas,” said Prime Minister Narendra Modi.

In a display of the strength of the relationship, India and Egypt have elevated their ties to 'Strategic Partnership' covering political, security, defence, energy and economic aspects.

India and Egypt are also celebrating 75 years of the establishment of diplomatic relations. The choice of Sisi as a chief guest—like every chief guest before—is a signal. An important country in West Asia, India is hoping to keep in focus the strong relationship with the region. Especially, as last summer turned out to be a rather hot one after controversial remarks made by former BJP leader Nupur Sharma. Egypt was one of the few countries that chose not to make a statement. In the year of the G20, India will be keen to emphasise its diverse ties across regions.

In a special briefing, foreign secretary V.K Kwatra said India enjoyed “robust’’ relations with the whole region. “If you look at India’s cooperation in the whole region in that part of the world, you will actually find that the extent of robustness, strength, diversity, and depth which is there in India’s cooperation in almost every country is a very strong and positive story,’’ he said.

One of the areas of focus that the two leaders stressed on was terrorism. “We are in agreement that terrorism is the biggest threat to humanity,’’ said Modi. “Both countries also agree that strong steps are required to end cross-border terrorism, and for that we have to convince the international community through joint efforts.”

The visit comes at a time when Egypt is facing an economic crisis. And the two countries focused on ways to food, fertilisers and energy issues in the backdrop of the Ukraine-Russia conflict. Last year, India lifted the restriction of export on wheat and sent 61,000 tonnes of wheat to Egypt. The two countries are also hoping to take their trade to $12 billion soon.