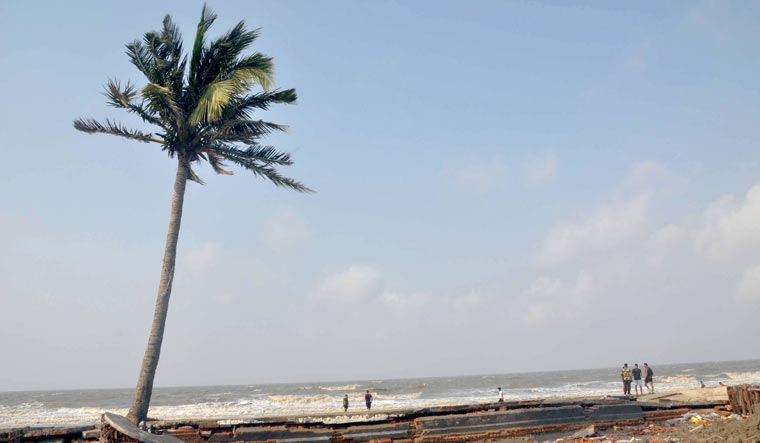 The India Meteorological Department (IMD) has issued an advisory that Cyclone Sitrang, a deep depression over the Bay of Bengal, has intensified into a cyclone on Sunday evening and will likely turn into a severe cyclonic storm.

Sitrang, currently lying about 520 km south of Sagar Island in Bengal, is likely to hit the Bangladesh coast early on Monday.

In a tweet during the early hours of Monday, the IMD said Sitrang was about 520 km south of Sagar Island in Bay of Bengal, and 670 km south-southwest of Bangladesh’s Barisal.

"Moving north-northeastwards, it will further intensify into a severe cyclonic storm in the next 12 hours," the tweet also said.

The IMD added that the cyclone, named Sitrang by Thailand, is very likely to cross the Bangladesh coast between Tinkona Island and Sandwip close to Barisal around October 25 early morning. The wind speed of Sitrang will reach 90 to 100 kmph gusting to 110 kmph, the India Meteorological Department (IMD) said.

Sitrang will likely cause heavy to very heavy rain in the coastal districts of West Bengal and isolated heavy rain in north coastal Odisha, the IMD added.

"It will mainly affect the Sunderbans spread over West Bengal and Bangladesh as tidal waves are likely to reach a height of six metres owing to the twin effect of the weather system and new moon," deputy director-general of the Regional Met Centre in Kolkata Sanjib Bandopadhyay told PTI.

Kolkata, Howrah and Hooghly are likely to receive moderate rain on Monday and Tuesday, adding that heavy rain will occur in North and South 24 Parganas and Nadia districts on Tuesday, he said.

"The height of the waves due to the cyclone will be one metre above astronomical tide level, but since new moon is on October 25, the tide level owing to it will be five to six metres at West Bengal and Bangladesh coasts, so effective height of the tide at the time of landfall on the morning of that day will be around six metres in North and South 24 Parganas," he said.

South 24 Parganas' district magistrate Sumit Gupta said that already 10,000 people in the district have been moved to safer places, and work is on to shift another 30,000 people. Seven teams of NDRF and SDRF with 26 personnel in each team were on standby in the district, he said.

A Kolkata Municipal Corporation official said it has initiated steps to tackle any situation that may emerge owing to Sitrang in the metropolis, including keeping all pumping stations fully active and making arrangements for shifting residents of dilapidated buildings to schools and community halls.

The weather office warned that wind speed over sea areas will reach speed of 90 to 100 kmph gusting to 110 kmph in north Bay of Bengal, advising fishermen not to venture into the sea and the suspension of all offshore activities on October 24 and 25.

In Odisha, heavy rains are likely to lash certain places in the coastal districts of Kendrapara, Jagatsinghpur and Puri till 8.30 am on Monday. A yellow warning of heavy rainfall was issued for Balasore, Bhadrak, Jajpur, Kendrapada, Jagatsinghpur, and Cuttack till Tuesday morning.