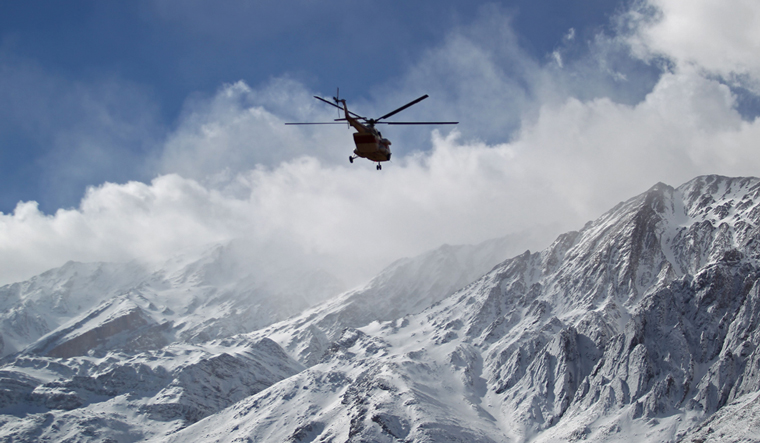 Just before the Army's Advanced Light Helicopter (ALH) crashed near Tuting in Arunachal Pradesh, its pilots sent a 'mayday' call to the air traffic control suggesting a technical failure in the aircraft, military officials said on Saturday.

Five Army personnel were killed after the twin-engine weapon system integrated (WSI) version of the indigenously-built helicopter went down at Migging village in Upper Siang district of the border state at 10.43am on Friday.

A 'mayday' call refers to a distress call over radio communication by pilots to the air traffic control in case of emergency.

"Prior to the crash, the Air Traffic Control (ATC) had received a mayday call suggesting a technical or mechanical failure. This will form the focus of the Court of Inquiry (CoI)," said an official.

The Army headquarters ordered a CoI to investigate the causes of the accident. The officials said the weather around Tuting was good for flying operations on Friday and the two pilots had a combined experience of flying for more than 1,800 hours.

"It is reported that the weather was good for flying operations. The pilots had more than 600 combined flying hours on ALH (weapon system integrated version) and over 1,800 service flying hours between them," the official said.

The helicopter was inducted into the service in June 2015. A massive search and rescue operation was launched by the Army and the Indian Air Force in the high-altitude treacherous region following the crash. The Army offered deepest condolences to the bereaved families.

"General Manoj Pande #COAS and All Ranks of #IndianArmy salute the #Bravehearts Maj Vikas Bhambhu, Maj Mustafa Bohara, Cfn Aswin KV, Hav Biresh Sinha and Nk Rohitashva Kumar who laid down their lives in the line of duty at #Migging; offer deepest condolences to the bereaved families," the Army tweeted.

The accident involving the ALH in Migging came two weeks after a Lt. Colonel from the Army's aviation wing was killed and his co-pilot suffered severe injuries when their Cheetah helicopter crashed in a forward area near Tawang in Arunachal Pradesh.

Between March 2017 and December 2021, 31 people lost their lives in accidents involving 15 military helicopters that included four ALHs, four Cheetahs, two ALH (WSI), three Mi-17V5, a Mi-17, and a Chetak, according to official details.

The Indian Army's aviation wing has been deploying the WSI variant of the Advanced Light Helicopter Rudra in the region, adding more teeth to its tactical missions in view of the lingering border row with China in eastern Ladakh.

The multi-role helicopter of 5.8 Tonne class is an armed version of the Advanced Light Helicopter Dhruv. The indigenously designed and developed ALH-Dhruv is a multi-role, multi-mission new generation helicopter.