Farmers detained while trying to meet the BJP president 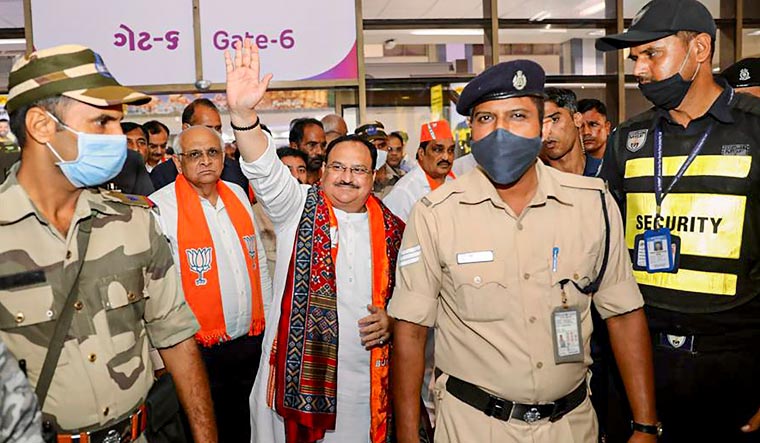 BJP president J.P. Nadda on his arrival in Ahmedabad | PTI

On the day BJP national president J.P. Nadda began his visit to Gujarat and launched 'Namo Khedut Panchayat', several leaders of the Bharatiya Kishan Sangh were detained in state capital Gandhinagar while trying to meet him. The BKS is the farmers wing of the BJP’s parent body RSS and its leaders have been on a dharna to highlight their long pending demands.

They were released after Nadda's programme ended.

The arrest of the farmer leaders is an embarrassment of sorts for the ruling BJP as Nadda, in his speech, showered praise on Prime Minister Narendra Modi, saying “if there is any leader in the country who has worked for the farmers, it is Modiji”. The BJP chief also cited various initiatives of the central government for farmers.

Their demands include re-survey of land and crop insurance. The farm leaders have been saying that in the wake of rising prices of diesel, it is not possible to plough the farms using tractors.

Meanwhile, Nadda visited Rajkot later in the day. On Wednesday, he will hold different meetings with state BJP office-bearers and chiefs of various cells of the party. He will also address party's Lok Sabha and Rajya Sabha MPs from Gujarat.

Nadda will also attend a Town Hall programme of professors and the National Mayors’ Conference in Gandhinagar.